The salaries of each fighter was reduced by 20 percent, following a series of defeats and losses which the group’s fighters experienced recently in Mosul and Menbij 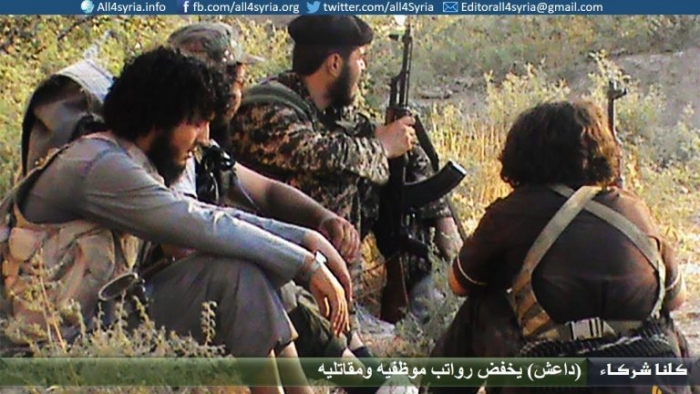 The ISIS organization has decided to reduce the salaries of its civilian employees in the areas under its control by half, and cut the salaries of its fighters by 20 percent, following losses including most recently the city of Menbij in the Aleppo countryside.

With successive defeats and losses of large areas, most recently Menbij, a number of the organization’s leaders met in Deir Ezzor with some commanders and officials responsible for civilian work and services, and issued a decision for new reductions in the salaries that the group provides to workers in civilian affairs, informing them of deductions of 50 percent for all workers’ salaries in the areas of health, the service office, water and electricity, the zakat bureau, the Islamic police, the Hisbah agency, tax collectors, the tax bureau, the sharia court, the media bureau, and others.

The organization’s fighters are not in a better state. The salaries of each fighter was reduced by 20 percent, following a series of defeats and losses which the group’s fighters experienced recently in the Iraqi city of Mosul and the city of Menbij. The group’s dream, its abilities, and the areas under its control have begun to dissipate, not expand, and along with them the group will lose a great deal of financial resources, which had come thanks to taxes and zakat, as well as the group’s inability to extract crude oil from the fields and wells in Deir Ezzor and sell it. This is because of the air raids of the international coalition on the fields, wells and tanks, most recently on August 11 and 12, when Coalition planes hit more than 50 crude oil tanks in the al-Mayadin desert and on the outskirts of the village of Zeeban.

The salaries of workers in civilian affairs and service sectors for the ISIS group’s staff ranged between 30,000 and 35,000 Syrian lira, while the salaries for fighters were as follows: 100 dollars for a fighter, 50 for the wife of the fighter, and 35 for each child of the fighter. Foreign fighters received a higher salary than Syrian fighters and workers in the civilian and service sectors.

The group has tried in this way to find solutions to make up for its material losses in the areas under its control. The group’s military victories have begun to fade under the eyes of its leaders, without the immediate ability to find basic solutions for that. This comes after the expansion of the international participation with the factions that are fighting the group on Syrian territory to destroy them.