Syria witnessing the use of chemical weapons by terrorist organizations against civilians and army through support by regional and Arab states, claims Syrian envoy 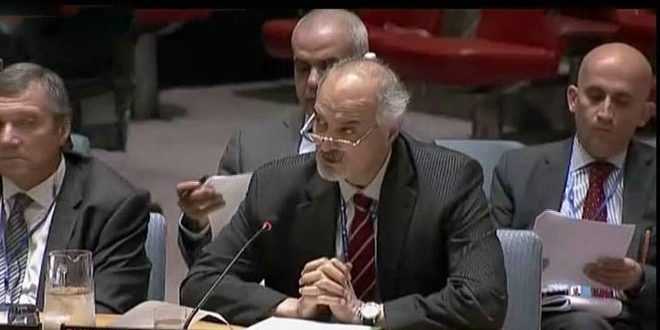 Syria’s envoy to the United Nations said on Tuesday there are still gaps in applying UN resolutions which are helping criminals deliver weapons of mass destruction to terrorists.

Bashar al-Jaafari, Syria’s permanent representative to the UN, told members at a UN Security Council session that the council did not move in spite of evidence that unveiled terrorists’ attempts to transport sarin gas from Turkey into Syria.

“The dangerous violations of resolution 1540 are clear as a reality where Syria witnesses the use of chemical weapons by terrorist organizations many times against civilians and army personnel through a support by regional and Arab states,” Jaafari said.

He added that on June 13, terrorist groups in Housh al-Fara in Damascus countryside targeted a number of Syrian army soldiers with a bomb containing chemical materials, while other terrorists targeted the Al-Awameed region in Aleppo with shells containing poisonous materials, killing six civilians on August 2.

Jaafari said that terrorist groups have sent around 450 artillery shells equipped with mustard gas to Mosul in Iraq and Raqqa in Syria.

He added that Syria affirms its commitment to international resolutions and conventions on cooperation and exchange of information, adding that Syria calls on UNSC to assume its duties and guarantee WMD do not fall into the hand of terrorists.