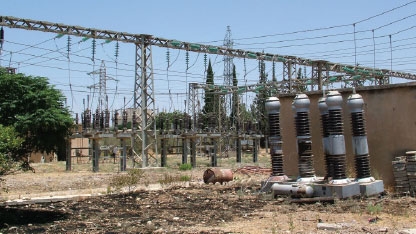 Syria’s Electricity Ministry has been subjected to at least 800 billion Syrian pounds (3.7 billion USD) in damages since the start of the crisis, according to energy officials.

Mustafa Sheikhani, general manager of the institute for distribution of electricity, said the electricity sector was among the most vital sectors and has been subject to attempts to target it, destroy it, and put it out of service — however, the government had been able to support the sector in parallel with the Electricity Ministry. The government also worked on ensuring the integrity of the network by carrying out repairs and continuously rehabilitating an important part of the ministry’s work area. In this framework, the ministry has succeeded in reducing the rate of technical losses to within 9 percent since the start of the crisis, with the loss rate in 2012 reaching 39 percent during the acts of destruction and assault on the network, in addition to the growing cases of illegal siphoning of energy.

Sheikhani clarified that they are currently acquiring close to 30 percent of the total amount of practical energy required by securing about 2,000 megawatts, noting that the total energy demand in the years before the crisis had reached 9,000 megawatts, but the closure of a number of facilities and industrial and commercial activities had contributed lowering the number to 6,000 megawatts.

Here Sheikhani confirmed that the state was exerting efforts to secure and raise the level of production of electrical energy through all available resources. In this context, he clarified that the state was securing about 100,000 tons of imported fuel per month, representing a ship cargo with a value of $28 million, which equaled about 14-15 billion Syrian pounds, that is, the state was paying 700-800 million pounds per day to secure the necessary amount of fuel to generate electricity, and especially given that the gas it is currently securing does not exceed 7 million cubic meters, after it had been securing 12-15 million cubic meters before the crisis, as well as close to 15,000 tons of fuel from local production.

Regarding the number of electricity subscribers in Syria, he said that the total number of subscribers had reached 5.5 million and that the ministry was trying to develop the efficiency of its networks and fuel lines concerned with the distribution of electrical energy to guarantee the arrival of the largest amount of generated energy. In this context, work is underway to continuously create new substations in addition to working on reducing the hours of rationing and install a rationing program aimed at some service and production sectors, knowing that the ministry has lifted rationing from a number of vital sectors, such as water wells and water pumps, so as to secure drinking water and the necessary water for citizens.

He pointed out the equitable distribution of electricity produced is customized to each province based on its basic load, weighting and noting the rationing program. From this every company in the province works on distributing the quantities supplied to it according to their plan and in accordance with a number of priorities, such as providing and distributing energy to wells, hospitals, and other vital sectors necessary to citizens.

Regarding how to increase and improve the electrical situation, he said that the ministry was oriented toward boosting work with renewable energies. The ministry has worked on enacting legislation, especially in permitting investment in the generation of these energies, in addition to encouraging the citizen to secure his needs if he wants renewable energy, so that the amount of energy secured is equal to traditional energies.