New report by human rights group claims regime is responsible for the death of 188,729 civilians, over 90 percent of all victims from nearly six years of war in Syria 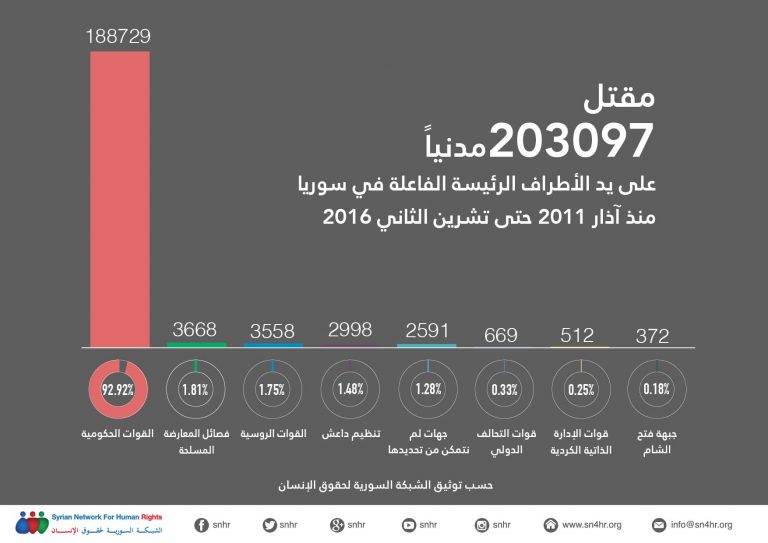 A UK-based human rights monitor has issued a report in which it discusses the toll of civilian causalities, the toll of women and children, deaths due to torture, and the death toll of medical staff and journalists at the hands of the six major warring parties in Syria.

According to the report, put together by the Syrian Network for Human Rights, the number of victims at the hands of the Syrian regime reached 188,729 civilians. The regime began its killings by firing on protestors, and then developed its use of weapons from tanks to artillery to chemical weapons, barrel bombs and rockets, in addition to widespread torture inside its detainment centers.

The report said that the Syrian regime had behaved monstrously and with stark indifference, modelled on mafioso regimes, which exceed all international and even Syrian laws. They have attacked schools and hospitals and bombarded clinics and civilian districts in a way unprecedented in the modern era, the report added.

Fadel Abdel Ghani, director of the Network, added: “What has led us to constantly renew these basic truths in the development of the popular uprising into armed conflict, is that the Western mentality still prioritizes fighting cross-border Islamic extremist groups while ignoring the terrorism of the ruling regime and the cross-border militias with which it is allied, even though it was a primary cause in the murder and the undisputed leader in committing all types of crimes and violations in Syria.”

According to the report, Russian forces, which claim to have joined the conflict in order to combat the Islamic State group, have killed no fewer than 3,558 Syrian civilians – more than the extremist group itself, which has killed 2,998 civilians. The toll of civilian victims which have been killed at the hand of US-led international coalition forces have reached 669 civilians according to the report, which is higher than the number of civilians killed by Jabhat Fatah al-Sham, which is 372 civilians.

The report said that the first and main responsibility for protecting civilians fell on the state and its agencies, but the regime had insisted on carrying out systematic crimes according to the reports of the independent rights commissions of the Human Rights Council, which meant that the responsibility moved just weeks after the outbreak of the popular uprising in Syria to the international community, to take collective measures in accordance with Articles 41 and 42 of the United Nations charter. But it has not lifted a finger because of Russian and Chinese protection for the Syrian regime, and has thereby sent a message to the autocratic world that it is enough to sign a deal with an autocratic state with permanent membership on the Security Council to receive sponsorship and protection and political and diplomatic support.

The report included advice that the international community represented by the Security Council take full responsibility for protecting civilians.