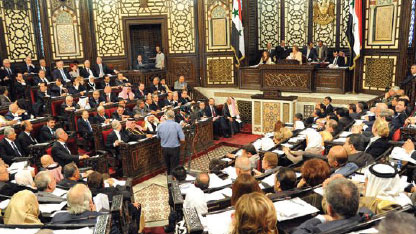 The Parliament discussed a number of issues on its agenda and approved a draft law that amend civil status legal items issued in accordance with Legislative Decree No. 26 issued on 12/4/2007.

During the session, a dispute arose around a number of points, especially Article 29, related to raising an orphan if they are found without known parentage. Disputes arose around the paragraph, “The orphan is considered a Syrian Arab Muslim,” which some lawmakers objected to on the basis that the child might not be Muslim, and that upon turning 18 he determines his own religion if there are views against that, given that the orphan must take religious courses in school.

The interior ministry, Mohammed al-Shaar, said that the aim of the amendments to the noted law was to simplify the procedures for citizens inside Syria and abroad and at the lowest cost without giving up the basic requirements, whether in national, legal, or in terms of rights. He noted that there were fines and criminal punishment attached to the amendment, stressing the importance of controls related to criminal punishment and related to the fines in order to effectively manage the work of the civil status affairs.