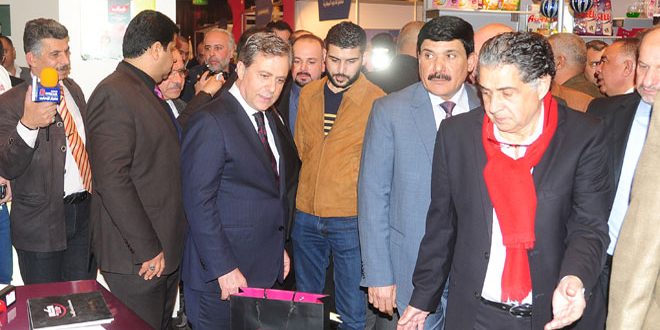 At least 200 Iraqi tradespeople and industrialists attended the first export exhibition hosted by the Syrian Exporters Union and the Ministry of Economy and Foreign Trade at the Damascus-based Dama Rose Hotel.

The exhibition, which aims at enhancing the Syrian local industry and exports, will showcase products by 100 Syrian industrialists and producers from different sectors such as textile, agriculture, finance, chemistry, transportation, energy, technology and packaging.

The three-day event will include lectures as well as meetings between Syrian and Iraqi producers, industrialists and tradesmen to sign agreements on exporting Syrian products to the Iraqi market.

Minister of Economy and Foreign Trade Adib Mayaleh thanked Syrian industrialists for their steadfast and continued production despite the destructive practices and acts of sabotage carried out by terrorists backed by the US and Turkey.

He called for providing all necessary support to the Syrian producers who insisted to continue working in small workshops after the destruction of their factories.

Mayaleh indicated that the wide participation of Iraqi businessmen is proof of the determination of Syria and Iraq to open crossings and restore the economic, trade and industrial relationship between the two countries.

In turn, Chairman of the Iraqi Federation of Chambers of Commerce Jaafar Al-Hamadani said that the Iraqi participation aims at moving forward sustainable development in both countries, enhancing economic relations and opening border crossings to facilitate trade between the two sides.

For his part, Syria’s Ambassador in Baghdad Sattam al-Dandah stressed the importance of meetings between the entrepreneurs for shedding light on new Syrian products and discussing export possibilities to the Iraqi markets.