Loyalist newspaper Al-Baath reports on meeting between high-level officials and representatives from trade, industry and agriculture which aimed at reassuring investors on the state of the economic sector 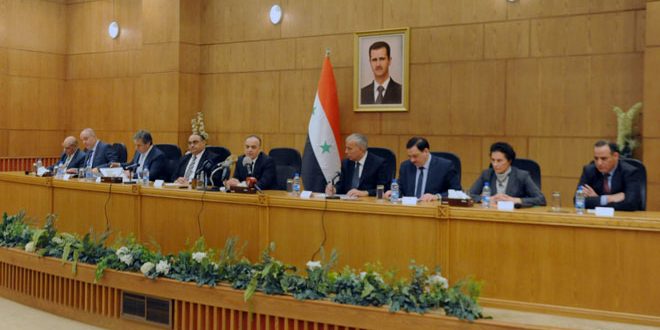 Prime Minister Imad Khamis stressed the importance of coordination between the Syrian government and the economic sector, saying the state is ready to take steps, issue decisions, and amend legislations to improve the work of unions and federations.

During an economic meeting on Saturday, Khamis said that the government considers the private sector an essential partner in the development process, and that there can be no errors in the mechanisms of joint work within the sector.

Discussions during the meeting touched on a number of issues including opening border crossing with Iraq, curbing smuggling, reducing electricity fees for industrialists, addressing the issue of delayed loans, amending legislations, protecting local products, and increasing imports in terms of raw materials for industries.

Participants from the federations of commerce, industry and agriculture called for increased coordination, addressing post-production issues such as marketing, simplifying exportation and licensing procedures, and reducing customs fees for imported raw materials.

Khamis said that a work plan should be implemented to boost confidence between the government and partners in economic development, adding that the Syrian government is ready to take any step that achieves development and serves the public interest.

He also suggested Syria could benefit from the experience of unions and federations in other countries, while also calling on Syrian expats and entrepreneurs to return and invest in the country.

Meanwhile, Economy Minister Adib Mayaleh said that the government has prepared a clear list of imported items that include basic and essential raw materials for production, while Internal Trade Minister Abdullah al-Gharbi pointed to a recent agreement with Iraq to enhance joint action in the field of commerce.

In turn, Finance Minister Mamoun Hamdan said that work is currently underway on a number of projects and studies related to exports and exempting industrial equipment from customs fees.