Syrian president tells Venezuela's Maduro over the phone that the struggles the two countries are facing are the result of foreign attempts to weaken the two states, government media reports 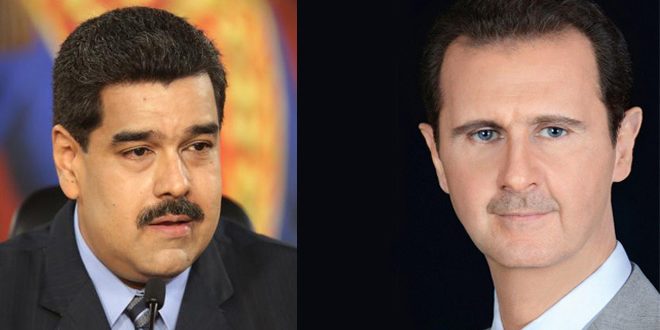 Venezuelan President Nicolas Maduro congratulated on Monday President Bashar al-Assad and the Syrian people on their achievements in the war against terror.

During a phone call between the two, Maduro said that these achievements were the fruit of the exceptional struggle shown by the Syrians and their support to the leadership against this war.

The Venezuelan president affirmed his country’s firm support for Syria, hoping peace and stability would return as soon as possible.

For his part, President Assad thanked Venezuela for its stance supporting Syria, stressing that events taking place inside the two countries are the result of foreign attempts to weaken the state.

Assad said that these attempts to undermine stability and spread chaos in Syria and Venezuela are the price of their commitment to sovereignty and independent decision making, as well as a rejection of the West’s dictates.