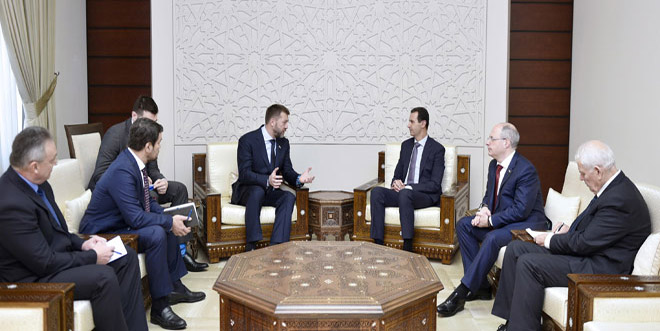 President Bashar al-Assad said on Wednesday the situation in Syria is moving in a direction desirable to both Damascus and Moscow.

His remarks came during a meeting with a delegation of the Russian Duma headed by MP Dmitry Sablin, during which Assad hailed Moscow’s position and the sacrifices it has made in the course of the war against terrorist organizations in Syria.

The president highlighted the important role Russia plays in the face of Western projects that are aimed at imposing hegemony on countries that strive for independence and sovereignty and the interests of their own people.

Members of the Russian delegation stressed that their country will continue to stand by the Syrian people in their war against terrorism, adding that Russia is keen on providing humanitarian support to the Syrian people to alleviate their suffering.

In a statement to SANA, Sablin said the meeting with President Assad was “very good,” adding that the two sides discussed cooperation in the fields of education and health through expert exchange.