Addressing the members of the Asian parliamentary assembly at Islamabad in Pakistan, the Syrian Parliament Speaker Hadia Abbas called for concerted coordinated efforts to uproot terrorism in Asia 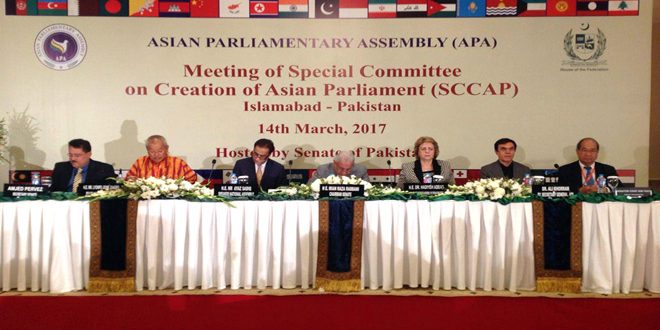 The Asian parliamentary assembly, attended by the Syrian government, opened in the Pakistani capital of Islamabad this morning to discuss Asia’s political conditions, with a focus on the issues of international terrorism, economic cooperation, and establishing the Asian parliament.

Hadia Abbas, Syrian Parliament Speaker, said in her speech before the Asian parliamentary assembly today: “I am honored to convey to you the greetings of the steadfast Syrian people and Mr. President Bashar al-Assad and to express to you our great hopes for what will emerge from our meetings in terms of important resolutions to bolster security and stability on the Asian continent.”

Abbas stressed the current urgent need for cooperation and collaboration between Asian states, reminding that after more than a decade since the foundation of the first Asian parliamentary assembly, challenges are on the rise.

Highlighting the widespread regional chaos amidst growing extremism and terrorism in many parts of the continent, she called for concerted efforts to foster cooperation between the Asian states and people through strengthening parliamentary links. She hoped that these renewed efforts would help support “the chance for peace and security and stability in our region and the world.”

She said that nothing would be effective against terrorism except for real work in the political and cultural spheres. She reiterated that Asian states must act today hand in hand to prevent the spread of extremism and takfirism and strife through media, pointing to this step as the first on the path to confronting extremism and terrorism.

Abbas stated that the unilateral coercive economic measures imposed on the Syrian people did not reduce the danger and ugliness of the terrorist war but in fact aided the suffering of Syrians, calling on the member parliaments in the assembly to support the Syrian calls for help and to take steps to support the Syrian government in aiding the internally displaced and driving the reconciliation process to a successful end.

The head of the parliament stated that the future of Syrian people depended on the policies and positions adopted at the Asian assembly. She renewed her invitation for cooperation and coordination of efforts to promote “a culture of love, tolerance, and peace,” and thereby set the stage for stability and peace and “an appropriate environment for achieving social welfare and a dignified life for our people and all the people of the world.”

Abbas visited the memorial for martyrs of democracy in Pakistan and placed a wreath of flowers on the memorial.