Head of government delegation calls the Astana talks a major achievement, as the issue of terrorism was resolved satisfactorily with the world acknowledging its existence in Syria 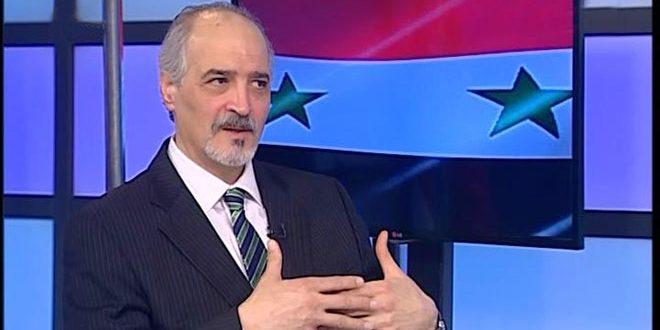 Syria’s Permanent Representative to the United Nations Bashar al-Jaafari stressed that, regardless of the lack of attendance of the opposition, the track of the past three Astana rounds was positive as it focused on monitoring the Syrian cease-fire deal and separating terrorist organizations such as Islamic State (ISIS) and the Nusra Front from the moderate armed groups which agreed to the deal.

Jaafari said that the Astana talks also united the efforts of the factions which signed the cease-fire agreement in the battle against terrorism, concluding that this issue was very important, but it had not been implemented so far.

In an interview with Syrian state television on Sunday evening, Jaafari said that the Russian side proposed a number of working papers that reflected its seriousness in finding a solution to the crisis in Syria, such as removing the mines planted by ISIS in Palmyra and archaeological sites, establishing a committee for  exchanging the kidnapped and setting up a constitutional committee on national reconciliation.

Jaafari said that the Astana talks complemented the Geneva ones and included positive efforts by the Russian and Iranian cease-fire guarantors. He added that since the launch of the peace talks in Astana, the Syrian government has not dealt with the Turkish delegation because it lacked confidence in the Turkish side's aims. Jaafari also blamed Turkey for problems in the region throughout its history.

Jaafari also said that the key solution for combating international terrorism begins with Turkey securing its borders, adding that the Turkish regime had instead used its borders as a source of pressure to obtain concessions.

He affirmed that terrorism was still used for driving political purposes, pointing to the latest terrorist attacks in Damascus, Homs, Aleppo and elsewhere in Syria as part of the process of the political pressure exerted on the Syrian government during the Geneva talks. The explosion of bombs before every session at Geneva was ample proof of that, he concluded.