Moscow tries to bail out Assad regime in statement claiming Syrian warplanes struck a facility for making toxic bombs, resulting in a fallout which killed scores of civilians in Idleb province on Tuesday, Al-Araby al-Jadeed reports 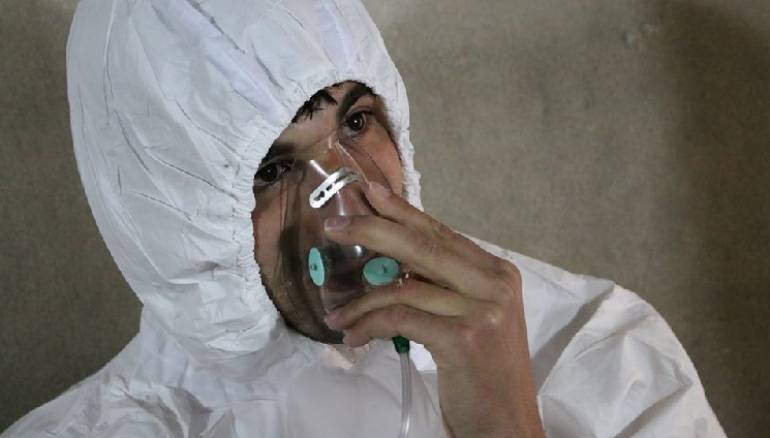 Russia defended its Syrian ally on Wednesday in the face of international outcry over a chemical attack that killed 72 civilians, including 20 children, in the rebel-held town of Khan Sheikhun, saying a Syrian airstrike hit a "terrorist warehouse" containing an arsenal of “toxic substances.”

"According to the objective data of the Russian airspace control, Syrian aviation struck a large terrorist warehouse near Khan Sheikhun," the Russian Defense Ministry said in a statement.

It housed "a warehouse making bombs with toxic substances" destined for Iraq, said the ministry, without stating if the strike was voluntary or deliberate.

The statement did not specify whether the Syrian regime knew there were chemical weapons there and pointed the finger at "terrorists" who they say hold the toxic arms.

The Syrian Observatory for Human Rights monitoring group said the attack also left dozens suffering from respiratory problems and symptoms including vomiting, fainting and foaming at the mouth.

Hours after the initial attack, airstrikes also hit a hospital in the town where doctors were treating victims, bringing down rubble on top of medics as they worked.

The deadly toxic gas attack on Khan Sheikhun is the latest in a string of chemical attacks since the Syrian conflict began in March 2011.