Kurdish-Arab alliance readies for the takeover of ISIS' self-styled capital in Syria's northeast, as the Western-backed forces look to completely cut off Raqqa from surrounding areas before its liberation, Saudi-owned Al-Hayat reports 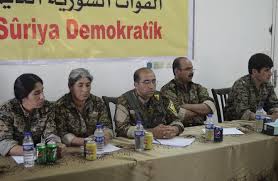 In a step which may increase the anger of Turkey, the Syrian Democratic Forces, a U.S.-backed Kurdish-Arab alliance, announced the formation of a “civil council” to administer Raqqa following the planned expulsion of Islamic State (ISIS) from the city. Ankara rejects the participation of Kurds in the liberation of the city, which is ISIS’ de facto capital in northeastern Syria.

The announcement of the formation of the civil council comes amid a continued assault by the SDF on the neighboring city of Tabqa with the aim of isolating Raqqa before liberating it. The assault's fourth stage began recently with an airdrop on the southern bank of the Euphrates River, allowing SDF fighters, backed by American special forces, to advance toward Tabqa after taking control of its military airport. Tabqa is about 40 kilometers west of Raqqa and lies on the opposite bank of the Euphrates River.

The Kurdish-Arab alliance distributed a video report on the advance of its fighters inside Tabqa and their control over the radio headquarters there, while distributing scenes of SDF fighters combing the village of Kabash Ghribi, which is northwest of Raqqa city. This advance suggests that the SDF alliance is trying to tighten the noose on the city of Raqqa from the north and west. The SDF is also trying to encircle the city from the east and has effectively succeeded in recent weeks in reaching the banks of the Euphrates east of Raqqa and cutting off the main road that connects it with the city of Deir-ez-Zor, ISIS' other headquarters in eastern Syria.

SDF spokesman Talal Silo said in a speech during the launch of the Raqqa civil council: “We pledge to continue what we have undertaken with the liberation of the city of Raqqa: fighting terrorism and removing the black clouds from over our noble people during our campaign. The Euphrates Rage campaign has begun to reach the gates of the city, promising to free it.”