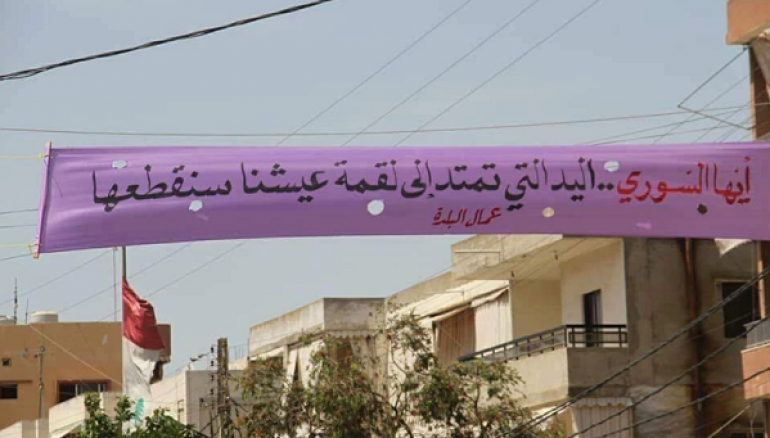 Local workers in the southern Lebanese city of Nabatieh have threatened Syrian refugee laborers for working in the Hezbollah-dominated city, with banners reading: ''O Syrian, the hand that extends to our livelihood will be cut off."

More than 1.2 million Syrian refugees live in Lebanon amid difficult living conditions and mounting discrimination throughout the Hezbollah-controlled country.

Syrian labor, even before the Syrian revolution erupted in March 2011, has been the main pillar of the Mediterranean country's economic hub.

Many Syrian refugees in Lebanon have been evicted from camps, with some sites being demolished, while thousands of refugees have faced expulsion due to a severe discrimination policy.

Some say the "extreme" acts against Syrians, like the creation of a "ghetto" system in areas where refugees reside, recall Nazi actions against Jews in Europe.

In a relevant development, Syrian refugees in Lebanese town of Arsal took to the streets on Friday, calling for the release of relatives being held in Lebanese prisons as detainees enter the second week of their hunger strike in the notorious Roumieh Prison.

The refugees and the Lebanese public are demanding general amnesty for the victims of arbitrary arrest, especially prisoners who are being detained without charge.

The Lebanese army has waged countless arrest campaigns in the border town of Arsal, a main shelter for Syrians living in Lebanon.