Cabinet members warn against risks of coordinating with the Assad regime over returning Syrian refugees, during session at the presidential palace 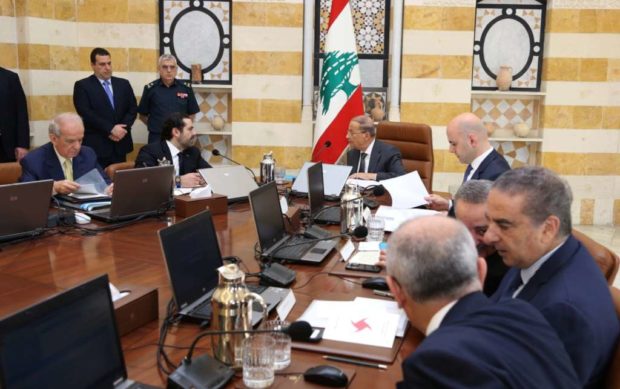 Lebanon’s cabinet session held on Wednesday at Baabda Palace saw disagreements between ministers over the return of the displaced Syrians to their country.

While ministers who support Syrian President Bashar al-Assad called for cooperation with the Syrian regime to achieve the quick return of refugees, other ministers from the so-called March 14 alliance rejected any political negotiation with the Syrian leader, stressing the need for a return process that would be held under security, political and humanitarian guarantees by the United Nations.

Wednesday’s cabinet session was chaired by President Michel Aoun, and followed tense remarks by ministers, some of whom warned against “handing over the refugees to the regime that abandoned them and drove them to flee death.”

However, Prime Minister Saad al-Hariri urged the March 14 ministers to avoid raising the refugee file during the session, noting at the beginning of the meeting that the issue of communication with the Syrian regime was controversial.

“We want the return of the refugees to their country today before tomorrow, but it is the responsibility of the United Nations, which has to put in place a safe plan for this return,” Hariri said, adding that an agreement was reached over the need to put controversial files aside.

This did not stop one minister, Ali Qanso, from stating during the meeting: “Should the Lebanese government fail to cooperate with the Syrian regime, displaced will not return to Syria.”

His comments sparked strong criticism by Minister of State Michel Pharaon, who told Asharq al-Awsat that Qanso’s remarks were “provocative and involve threats.”

During the meeting, Hariri announced he would be visiting the United States to meet President Donald Trump. He will also travel in August to France and Russia on official visits.

For his part, Aoun commended the judiciary in its key role in reducing security breaches and stressed the need for coordination with the country’s security forces.

In a news conference following the session, Information Minister Melhem Riachy said that the president raised recent security issues in the country, praising the role of the Lebanese army and the security forces, and warned against refugee camps “being transformed into hubs for terrorism.”