The Syrian government has written to the U.N. to reject Israel's decision to organize elections in the occupied Golan Heights, SANA, the state's news agency, writes 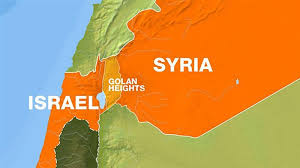 The Foreign and Expatriates Ministry affirmed that Syria categorically rejects the the Israeli occupation's announcement on holding elections for the so-called “local councils” in October 2018 in the villages of the occupied Syrian Golan, stressing that the Golan is an integral part of the Syrian territory and that it will return to the motherland sooner or later.

In letters to the United Nations secretary-general and the head of the Security Council, the ministry said that the Israeli entity has recently issued new resolutions related to holding elections in the villages of the occupied Syrian Golan according to Israeli law.

The ministry pointed out that these Israeli actions come as no surprise because Israel has been investing in the crisis in Syria through its support to armed terrorist groups, which has been clear from the beginning of the events in Syria.

The letters noted that the Syrian Arab citizens of the occupied Golan rejected, in the national document which they issued on March 25, 1981, any decision issued by the Israeli entity to annex the Golan, as well as all Israeli decisions aimed at depriving them of their Syrian Arab identity.

The ministry indicated that the fifth paragraph of the document showed that they do not recognize any of the so-called local councils and that the heads and the members of these councils do not represent them, and that they made an irrevocable decision to reject the imposition of Israeli identity on them, adding that after they learned of the new Israeli decision, the people of the Golan renewed their vehement rejection of these measures.

The letters went on to say that Israel, which has refused to comply with international legitimacy over the past years and rebelled against decisions to end the occupation of the Syrian Arab Golan, has repeated this rebellion by issuing this new decision.

The ministry pointed out that the Security Council affirmed in Resolution No. 497 that the Israeli decision to impose its law, jurisdiction and administration in the occupied Syrian Golan is null and void and without international legal effect, adding that the world body demanded that Israel rescind its decision immediately and declared that all provisions of the Geneva Convention on the Protection of Civilian Persons in Time of War are still in effect in the Syrian territory occupied by Israel since June 1967.

The letter asserted that the new Israeli decisions constitute another flagrant violation of the U.N. Charter, international humanitarian law, and the Geneva Convention.

The ministry concluded by saying that Syria categorically rejects the new Israeli decision and that it reiterates that the Golan is an integral part of Syrian territory and will return to the homeland sooner or later, stressing its commitment to standing by its people in the occupied Golan, who reject the annexation and this new decision.