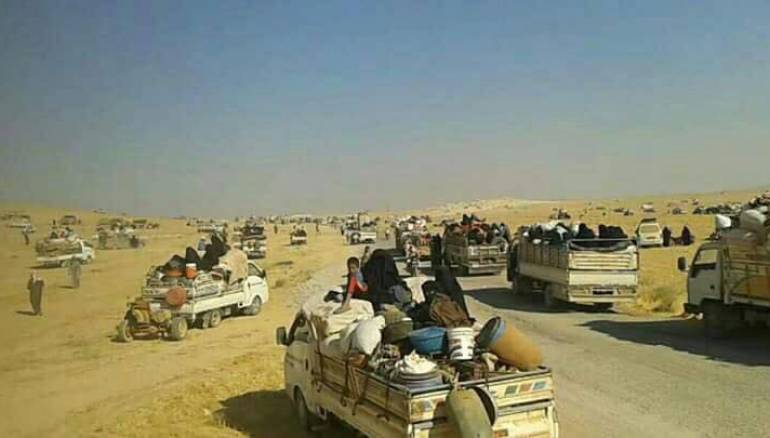 A suicide attack carried out by Islamic State (ISIS) militants killed at least 23 Syrian and Russian troops in the east of Hama province, pushing back an offensive mounted by the regime and its allies, residents told Zaman al-Wasl on Sunday.

The attack took place in the ISIS-held town of Uqayribat, a sub-district of Salamiyeh where close to 10,000 people have been trapped for months. ISIS has managed to recapture the town and two villages, according to local activists.

Residents claim to have witnessed a number of bodies belonging to Russian and Syrian soldiers, specifically from the Fourth Armored Division, the Syrian army's top elite unit.

On Tuesday, 15 displaced people from Uqayribat were killed in regime airstrikes on their shelter in the eastern countryside of Idleb, local activists said.

The strikes pounded the Al-Uthaib valley, a refuge for hundreds of people fleeing the ISIS-held town.

In interviews with Zaman al-Wasl, the displaced in Al-Uthaib spoke of a lack of aid and basic needs in their new refuge.

They also referred to a forgotten chemical attack on Uqayribat by the Assad regime last December that killed at least 90 people, saying it is no less important than the well-famed Khan Sheikhoun chemical attack that pushed the U.S. to attack the Syrian regime earlier this year.