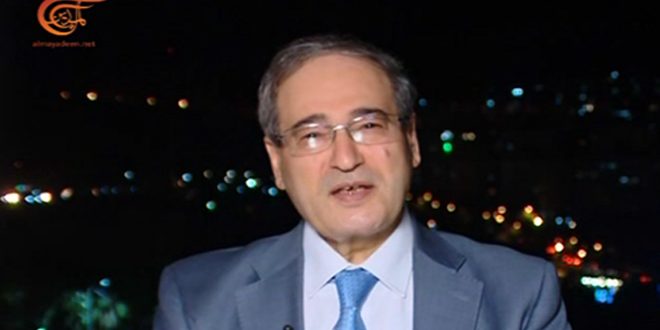 In an interview with Beirut-based Al-Mayadeen television on Sunday, Mikdad called the achievement a turning point in eliminating terrorism as “it brings us closer to the moment of the final victory.”

The minister pointed out that the attacks by international coalition warplanes against the Syrian army in the nearby Thardah Mountains last year paved the way for ISIS terrorists to attack and control the area. According to Mikdad, the Deir-ez-Zor Airport was a strategic target for U.S. forces and ISIS, which is one of Israel and America's tools in the region.

Syria, he said, will forever remain united as all the schemes against it begin to be exposed. The minister said that the United States is ready to exterminate entire peoples in order to secure its interests and strategic influence in the area that binds Syria with Iraq.

Speaking on the latest Israeli attack on an army position in Masyaf in the countryside of Hama, Mikdad said that the raid aimed at diverting the attention from fighting the Israeli-U.S.-backed terrorism, warning against the repetition of such attacks.

Mikdad said that the successes realized by the Syrian army earlier in Aleppo and today in Deir-ez-Zor are turning points on the road to defeating terrorism and fulfilling the aspirations of the Syrian people.