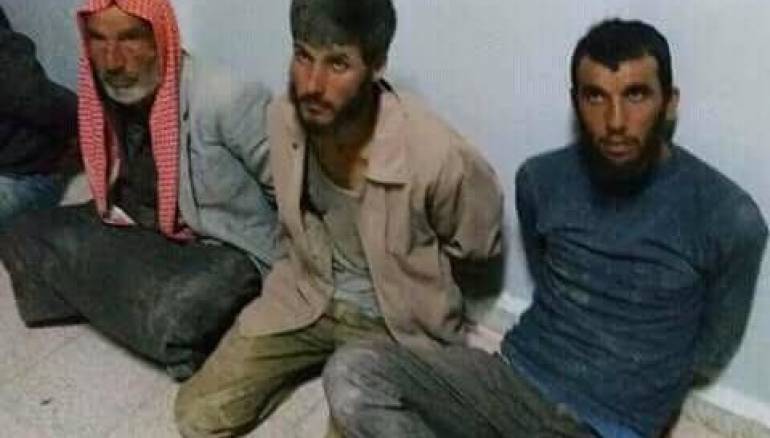 Dozens of Syrians fleeing the Islamic State-held town of Uqayribat in the province of Hama were arrested on Tuesday by regime forces and allied militias over claims the displaced are fighters in the radical group, according to a local council member.

Zeyad Abou Abdo, the press officer of Uqayribat local council, said the fate of the people remains unknown. The group was fleeing toward the Wadi Outhaib camp in northern Idleb.

Pro-regime media claimed they had ambushed ISIS fighters who were involved in attacks on the town of Salamiyah and its surrounding villages.

The local council of Uqayribat has renewed appeals to international and humanitarian organizations and to the United Nations Security Council to lift the siege on the town and to save its people from the “tragedy before it happens.” The local council described events as “the worst famine that the civilized world, which claims to defend human rights, has witnessed.”

Ahmad al-Hamawai, the head of the local council, said that if the siege continues with the indifference of international and humanitarian organizations the besieged could face death from starvation and thirst.

He pointed out that their food supplies are dwindling amid an absence of bread, flour and clean water. As a result, many water-borne diseases have spread among the population, exacerbating the problem. He added that four infants have died due to malnutrition.

“The severe shortage of food and potable water has led to deaths among the children present. Two children died due to malnutrition and water pollution. There are widespread diseases among the besieged children, such as jaundice and malnutrition, as well as cases of dehydration and fever,” said Hamawi.

The besieged are living without shelter to protect them from the heat of the sun, while the lack of tents has resulted in many people suffering from sunstroke or fever.

Hamawi added that the lack of access to medicine has resulted in one death and has warned that others who suffer from chronic diseases may die unless they receive treatment.

Many people were injured during regime and Russian air force bombing, he said, explaining that victims were unable to receive the necessary medical care and were forced to rely on primitive methods.

Hamawi pointed out that some families have been able to reach the liberated north safety, but said others had died or been injured attempting to pass through regime checkpoints.