Prime minister meets with Mauritanian lawmakers in the capital to discuss Syria's recovery despite plots aimed against it, official media reports 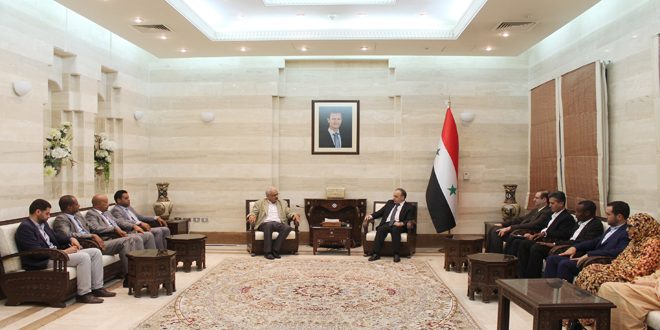 Prime Minister Imad Khamis said that the Syrian army has proven its commitment to defending the homeland against conspiracies, adding that the army’s victories have disappointed those who support and finance terrorism.

During a meeting with a Mauritanian parliamentary delegation, Khamis noted that Syria is pressing ahead with the reconstruction process led by President Bashar al-Assad, which is evidenced by the economic recovery of state institutions and the interest in foreign investment in Syria.

The prime minister also highlighted the important role of parliamentarians in defending the homeland within political circles and conveying the real image of events in Syria to the world.

For his part, head of the Mauritanian delegation Mohammed Weld Fal hailed the steadfastness, heroism and sacrifices made by the Syrian people to defeat their enemy.

He added that Syria is heading toward a prosperous stage in its history thanks to the unity of its people and their determination to restart the production wheel in order to overcome the difficult economic conditions.