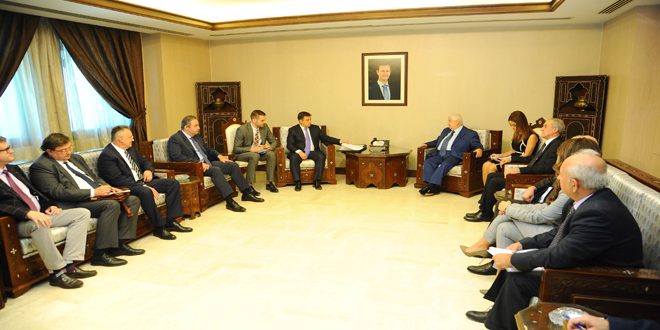 Syrian Foreign Minister Walid al-Muallem met with a Russian delegation on Sunday to address Moscow's participation in the upcoming reconstruction stage in Syria.

Head of the Russian delegation Deputy Energy Minister Kirill Molodtsov said the visit aims at holding constructive and comprehensive talks with the Syrian government to bolster economic and trade cooperation.

Russia, he added, will contribute to the rebuilding of what was destroyed in the country to help in restoring stability and peace.

Molodtsov said that Russia will continue to provide all forms of support and assistance to Syria to further bolster the country in the face of terrorism.

For his part, Muallem voiced appreciation for Russia's support in the fight against terrorism, reiterating that Syria is writing the final chapter of the aggression waged against it and is heading steadily toward the reconstruction process with the help of its allies and friends.

In the same context, the Russian delegation met with ministry officials to discuss prospects for cooperation and development in the water, power and oil sectors.