Opposition website says attacks hit town of Al-Bukamal, an area which has reportedly witnessed strikes by both coalition and Russian warplanes in recent days 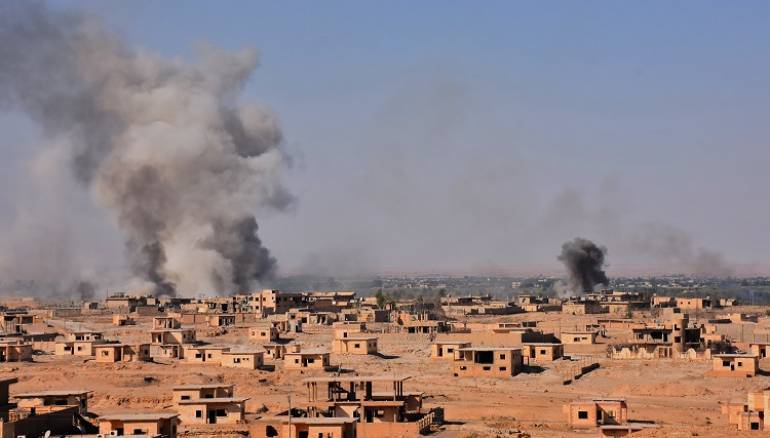 Russia’s warplanes have conducted more than 50 raids since early Monday on the eastern province of Deir-ez-Zor, killing at least 14 people in the border town of Al-Bukamal, a local monitoring group said.

The activist-run Furat Post Facebook page said the deadly strikes on the strategic town have pushed the death toll to 23 in three days.

Backed by Russian airstrikes, the forces of Syrian President Bashar al-Assad are pressing a battle to retake areas controlled by the Islamic State (ISIS) in Deir-ez-Zor.

The major offensive on ISIS territories in eastern Syria has left more than 3,000 people dead, including 955 civilians, since September, the deadliest month of the conflict this year, according to the Syrian Observatory for Human Rights monitor.

Of the 955 civilians killed in September, at least 207 were children, the Britain-based Observatory reported.

"More than 70 percent of the civilians were killed in regime and Russian airstrikes, or in air raids of the international coalition" fighting ISIS, the monitor's head Rami Abdul Rahman said.

A U.S.-led international coalition has been providing air support to the Syrian Democratic Forces, a Kurdish-Arab alliance also fighting the jihadists in their former northern bastion of Raqqa city and in Deir-ez-Zor.

Syrian troops backed by Russia have been battling for months to retake the Badia, which stretches from the country's center to the Iraqi and Jordanian borders and has been held by ISIS since 2014.

Meanwhile, at least seven Hezbollah militants were killed in a U.S. drone attack on their base in the Badia near Deir-ez-Zor, a source told Zaman al-Wasl.

The number of deaths among the Lebanese militants has seen an increase in the last 48 hours as ISIS wages counterattacks on the regime forces and its allied Shiite militias on the roads linking Homs and Deir-ez-Zor.

On Friday, 10 Hezbollah fighters were also killed by ISIS militants in the desert of Homs province, Turkish Anadolu Agency reported, while pro-Hezbollah websites posted photos of the slain fighters.