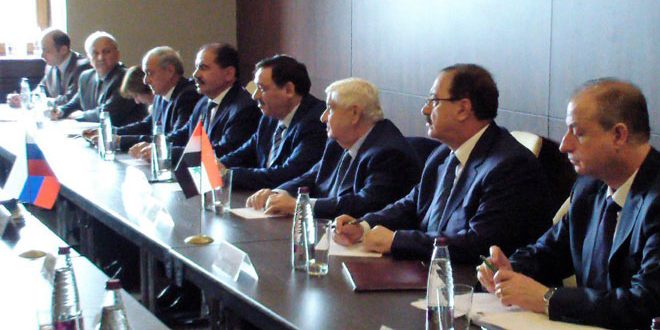 Foreign Minister Walid al-Muallem said on Tuesday that the meetings between Syrian and Russian representatives in Sochi have built a solid basis for economic cooperation between the two countries in line with the Syrian government’s reconstruction programs.

Syrian and Russian experts began meetings early this week in the Russian Black Sea resort city as part of the joint committee for economic, trade and scientific cooperation.

Muallem, along with Russian Deputy Prime Minister Dmitry Rogozin, is chairing the forum, which focuses on expanding Russian investments in the reconstruction process

“We are getting closer, through cooperation with you and with the rest of our allies, to final victory,” Muallem told his Russian hosts, voicing Syria’s appreciation for Russia’s principled stance “in our joint battle against the takfiri terrorist groups.”

“It is normal that we fight together our battle of building the Syrian economy,” he added.