First of eight bases on Syrian territory is expected to finish construction in the coming days, Al-Watan writes 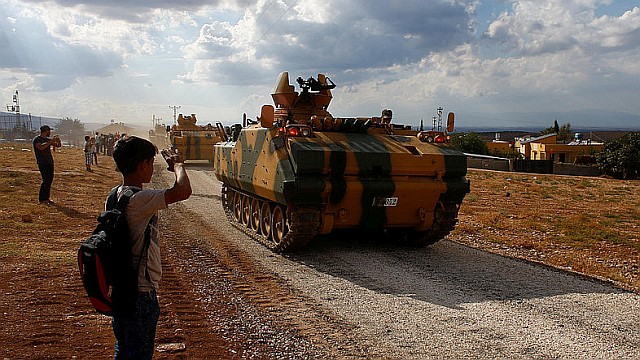 In a blatant departure and challenge to the decisions of Astana 6, and in parallel with the seventh round of talks in the Kazakh capital, Turkey is preparing to establish the first of eight military bases on Syrian territory near the city of Darat Azza in the western Aleppo countryside.

Local and military sources told Al-Watan that the Turkish army had increased the pace of its construction work to speed up the establishment of the base on the strategic area at the summit of Jabal al-Sheikh Barakat.

Opposition sources close to the Nour al-Din al-Zenki movement, which shares control over the western Aleppo countryside with the Nusra Front, said that the former Al-Qaeda-affiliated group was still guarding Turkish army convoys transporting military equipment to the area over the last 14 months. It added that Turkey is expected to finish the construction of the Al-Sheikh Barakat military base within a few days to impose a new fait accompli.

A military expert speaking to Al-Watan condemned Ankara’s flimsy arguments for establishing the military base, saying: “What is the significance of observation points monitoring other observation points if the aim is not to colonize the area and carry out espionage which will not stop at the borders of Afrin.”