Putin announces Russian mission in Syria is near completion, as leader renews call for political settlement 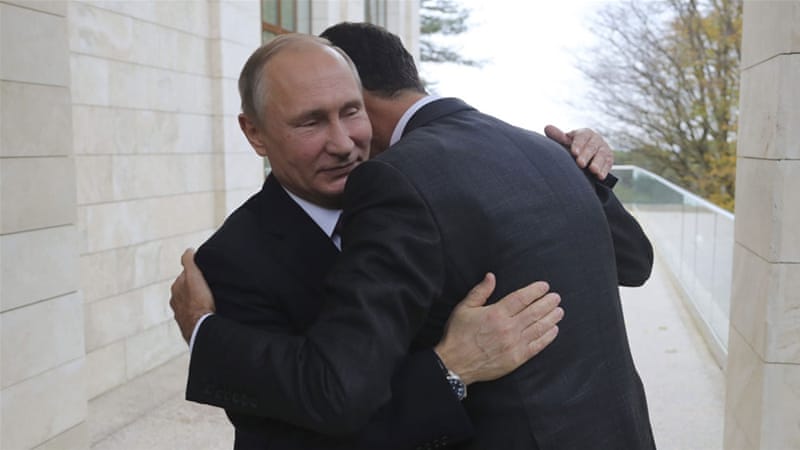 Putin’s comments came during a meeting between the two leaders in the Russian coastal city of Sochi on Tuesday.

The Russian president underlined that the timing of the visit was important for bolstering coordination between the two sides and holding additional consultations. He added that Damascus would give an assessment of the situation in Syria as well as its vision on the political process and the role of the United Nations before Putin meets with his Iranian and Turkish counterparts on Wednesday.

During the visit, Assad thanked Putin for the warm welcome, saying that the meeting comes nearly two years after Russia launched its military operation in support of Syrian army in its war against terrorism. He said the Russian backing has made significant achievements on different levels, on top of which are the humanitarian, military and political files.

The Russian policy has been active on different axes, Assad said, particularly with regards to upholding the U.N. Charter on sovereignty and non-interference in domestic affairs, as well as the right of nations to decide their own fate.

He underlined the meeting's importance in advancing coordination on counterterrorism, the political track, the Syrian National Dialogue Congress and the tripartite summit in Sochi.

Speaking on current peace efforts, Putin said that Russia is working with all parties to end the crisis and find a political solution in Syria, adding that this visit is an important opportunity for coordination on the basic principles of the political process.

The two presidents also touched on the current preparations for holding the National Dialogue Congress in Sochi, stressing that Syria supports any political work, particularly after the decline of terrorism, adding that all doors are open — locally and internationally — to support this track.

“Therefore, we hope that Russia will always succeed in what it says and does … to succeed in convincing others to not interfere in any political solution, and to only support it from abroad without any interference,” Assad said.

Putin will now hold consultations with the Iranian and Turkish presidents in the coming days, adding that there will be contact with leaders of several countries, including the U.S. President Donald Trump.