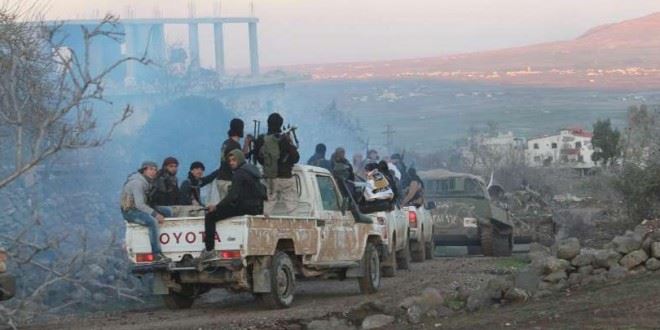 At least 35 members of the Khalid bin al-Walid Army, which is accused of pledging loyalty to the Islamic State (ISIS) group, were killed and wounded in clashes with two opposition groups in the southern province of Daraa.

A commander in the Free Syrian Army’s Tajammu al-Ahrar group said that 32 members of the Khalid Army had been killed and three wounded in clashes in the town of Taseel west of the city of Daraa, also noting the destruction of a Soviet-made heavy machine gun and a 23-mm canon.

He added that two rebel fighters from the Tajammu al-Ahrar and Tajammu al-Shahid Abu Hamza al-Naeimi factions were wounded in the clashes.

The two groups have since taken control of the “Dashma al-Zahriya” area, which is the first line of defense for the Khalid Army, as well as the Al-Safadi farm and the Mahmiyat al-Sidd warehouses.