U.N. envoy confirms Syrian government delegation will return to negotiations in Switzerland over the weekend after walking out last week in protest 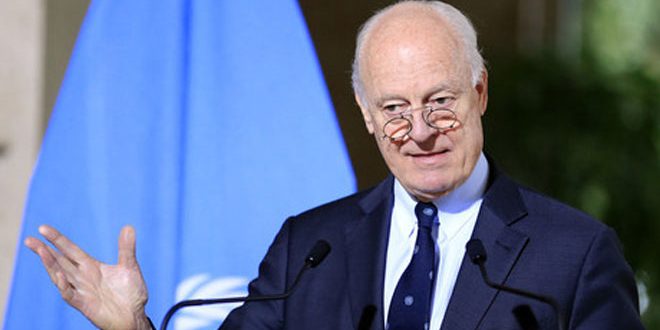 United Nations Special Envoy to Syria Staffan de Mistura has reiterated that talks between the Syrian government and the opposition in Geneva must be held without preconditions.

“We seek to have meaningful and direct talks… I’m not authorized to give advice to anyone… I am playing the role of a mediator,” de Mistura told journalists in a press conference on Thursday.

He added that “The Syrian government has informed us [the U.N. team] that its delegation will turn back to Geneva next Sunday,” expressing its readiness to carry on with the talks until Dec. 15.

He said that the talks would focus on a paper handed to delegates with 12 principles serving as the basis for the negotiations, in addition to the issues related to the constitution and the elections.

De Mistura indicated that the talks will be evaluated next week, adding that the failure of the current talks would hinder other initiatives on resolving the crisis in Syria.