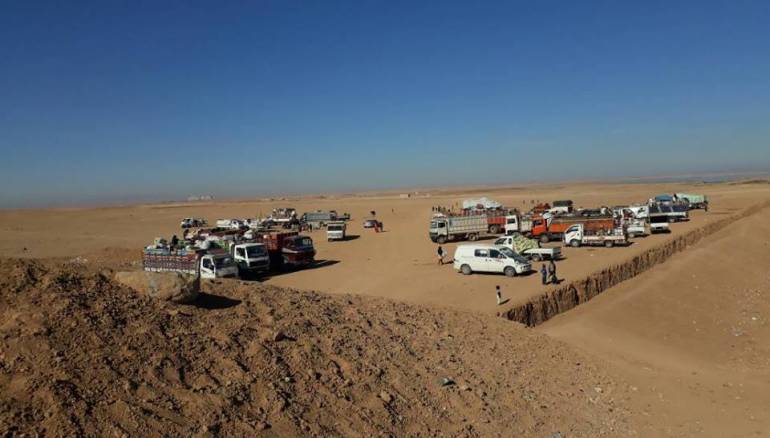 Around 800 displaced people fleeing the eastern countryside of Deir-ez-Zor have arrived to the Qana refugee camp in the northern province of Hassakeh, a local reporter said on Wednesday.

The Qana camp, which shelters 20,000 people who fled from the eastern countryside of Deir-ez-Zor, is suffering from a lack of aid and health care that has so far left three children dead.

According to the reporter, the new arrivals are being held at a gathering point in the town of Abu Khasab. More batches of displaced are expected to arrive at the Kurdish-run camp.

ISIS launched major attack on the Syrian army and the allied Palestinian Al-Quds Brigade militia late on Monday near the town of Albu Kamal, the agency reported.

At least seven militants from the Al-Quds Brigade were killed and 14 more were wounded, pro-regime news feeds confirmed.

The Assad army and Kurdish militias have pushed ISIS from much of the country’s north and east, with the group’s control in Syria and Iraq shrinking after the recent fall of its de facto capital in Raqqa, as well as strongholds in Deir-ez-Zor and Albu Kamal.

The U.S.-backed Syrian Democratic Forces took most of the eastern countryside of Deir-ez-Zor after fierce battles with ISIS last week.

On Monday, the SDF and Iraqi army formed a joint military center in an move aimed at protecting their common border region after ousting ISIS militants, Reuters reported.