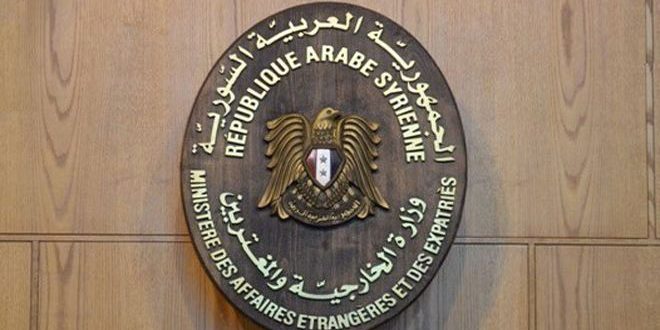 Syria on Thursday strongly condemned the international coalition for its recent massacre of civilians in the eastern countryside of Deir-ez-Zor province.

On Wednesday, coalition aircraft bombarded the residential neighborhoods of Al-Jurze Sharqi village in the eastern countryside of the province, killing 23 civilians, including eight children and six women.

In a letter to the United Nations, the Syrian Foreign Ministry condemned the international community for turning a blind eye to the massacres committed by the U.S.-led coalition in the provinces of Raqqa and Deir-ez-Zor.

The ministry added that countries which are party to the coalition are responsible for its crimes and massacres if they do not distance themselves from such acts.

It noted that recent reports and aerial photos prove the coalition is coordinating with militias on the ground on the one hand and the Islamic State (ISIS) organization on the other.

The letter read that the success of the Syrian army and its allies in eradicating ISIS from the main cities in Deir-ez-Zor has foiled the coalition’s attempts to transfer these terrorists to secured sites.

According to the ministry, the U.N. Security Council is yet to take any action to end the coalition’s attacks on Syria and its civilian population.