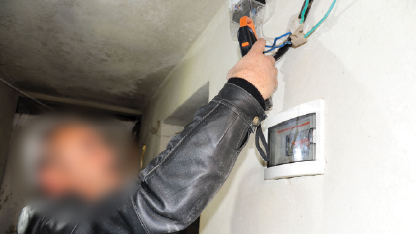 A judicial source has revealed that a significant number of claims have been referred to the criminal courts regarding theft by people claiming to be employees in the electricity and water industry. Meanwhile, Minister of Electricity Mohamad Zuhair Kharboutli confirmed that people had been arrested who had assumed the names of the real employees.

In a statement to Al-Watan, Kharboutli stressed that citizens should not allow anyone to enter into their homes or shops on the pretext of fixing the electricity unless verifying their identification issued by the ministry, and called on citizens to file complaints if the identification is not shown.

The minister said that a number of people accused of impersonating employees had been arrested and sent to the judiciary.

Kharboutli said that these swindlers and scammers are everywhere, adding that the ministry was tightening measures in this regard and that it cannot be tolerated as it directly concerns citizens.

In comments to Al-Watan, the judicial source said that the thieves entered homes claiming to be electricity employees, explaining that if only women and children were home, they would steal whatever they could carry from the house.

The source added that a number of thieves would even disassemble water and electricity meters under the eyes of neighbors who believe they are employees carrying out their work.

It added that the punishment for this sort of crime has increased to more than three years imprisonment, which could be reduced in light of mitigating circumstances. He stressed the need to implement harsher punishments for these crimes as they employ fraud and identity theft to steal.

The source believed that the crisis had played a major role in the presence of these people who exploit the issue of electricity theft to claim that they are inspecting the house’s meters.