Syria's foreign minister praises the aid group for its humanitarian assistance during the war, SANA reports 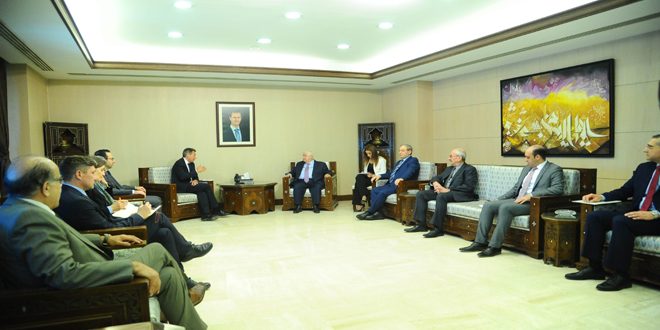 Foreign Minister Walid al-Muallem on Tuesday met President of the International Committee of the Red Cross (ICRC) Peter Maurer and the delegation accompanying him.

Talks dealt with the cooperation between Syria and the ICRC, and means to develop it in order to improve the humanitarian situation and meet the needs of Syrians affected by the crisis caused by the terrorist war and the sanctions imposed on Syria.

Moallem said that Syria appreciates the ICRC’s efforts in cooperation with the Syrian Arab Red Crescent in humanitarian fields, affirming the government’s readiness to enhance cooperation with both organizations.

For his part, Maurer thanked the Syrian government for its cooperation with the ICRC and the efforts it exerts to help the group deliver humanitarian aid to those who need it.

He voiced appreciation of the longstanding relationship between the Syrian government and the ICRC, pointing out to the role played by SARC in humanitarian work.