The Syrian president warns an Iraqi envoy that the United States seeks to weaken the region, SANA reports 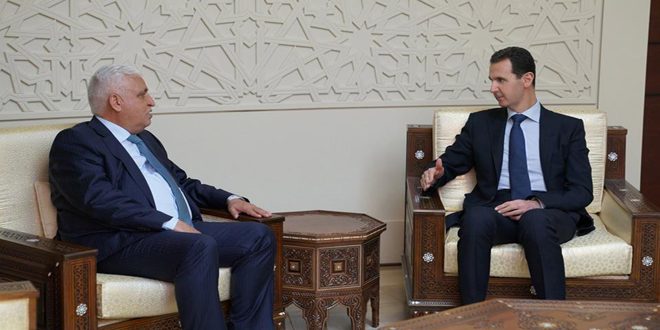 Fayad conveyed to Assad an oral message from Abadi in which he affirmed the importance of enhancing cooperation and coordination between the two brotherly countries in all fields, especially in the political and security sides in light of the critical conditions taking place in the region.

Assad, in turn, said that despite the great achievements in the war on terror by both Syria and Iraq, the United States, its allies and agents in the region have not given up their plots in an attempt to weaken and divide the countries of the region by continuing to provide material support and political cover to terrorist organizations.

The president added that this matter requires intensifying and unifying the efforts of the countries that stand in the face of those schemes, and they must seek to maintain their unity and restore security and stability to the region.