The Foreign Ministry has written to the United Nations, railing against the lack of reaction after a deadly attack on a marketplace, SANA reports 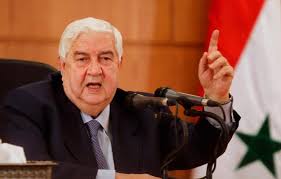 Syria urged the United Nations member states to honor the values set forth in the U.N .Charter, namely the one calling for sparing nations the woes of wars, demanding that they take steps to unmask the real goals behind the war waged against it.

In two identical letters addressed to the U.N. secretary-general and president of the Security Council, the Foreign Ministry blasted the silence of some U.N, member states over the incessant attacks of terrorists on civilian areas in Damascus, which it said “amount to an extermination, war crimes and crimes against humanity.”

The ministry’s letters came in the wake of a deadly attack mounted by terrorists positioned in the Eastern Ghouta, who launched a rocket attack on a bustling public market in Kashkoul area in Jaramana near Damascus. Forty-four civilians were killed and scores others were wounded.

“Representatives of the countries who scramble to convene emergency sessions in support of terrorists at the U.N. Security Council in New York and the Human Rights Council in Geneva have once again remained tight-lipped over this atrocious catastrophe whose victims are women and children,” the ministry pointed out.