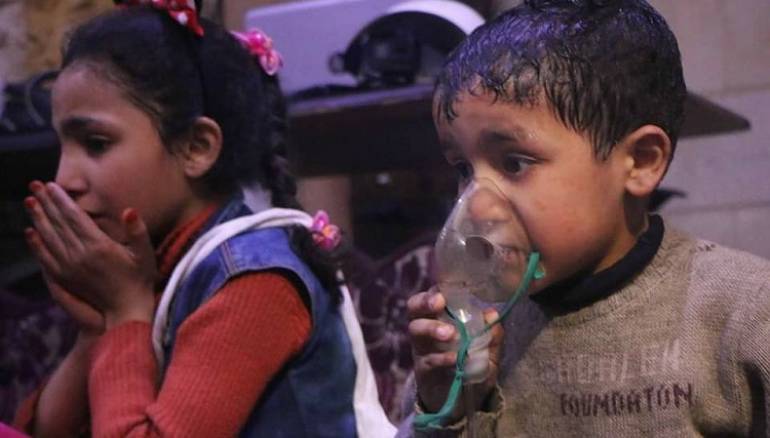 1. U.S. President Donald Trump described Syrian President Bashar al-Assad as an “animal” in a tweet on the weekend. "Many dead, including women and children, in mindless CHEMICAL attack in Syria," Trump tweeted. "Area of atrocity is in lockdown and encircled by Syrian Army, making it completely inaccessible to outside world. President Putin, Russia and Iran are responsible for backing Animal Assad. Big price… to pay. Open area immediately for medical help and verification. Another humanitarian disaster for no reason whatsoever. SICK!" [Source: The Syrian Observer]

2. A chlorine gas attack has been carried out by regime forces on Douma, the last opposition-held town in the Eastern Ghouta, the Civil Defense said Saturday. Civilians in a residential neighborhood in the city Douma suffered cases of suffocation it was targeted by chlorine poison gas. Saturday's chlorine attack followed deadly airstrikes that killed 40 civilians in the first bombardment on Douma since talks sputtered over a rebel withdrawal. [Source: Zaman al-Wasl]

3. Qatar on Sunday called for an urgent "international" investigation into the chemical attack carried out by Syrian forces on the city of Douma in the Eastern Ghouta of Damascus. The Qatari Foreign Ministry said that "the impunity of the war criminals in Syria led to the continuation of further violations and undermined the efforts to achieve justice and justice for the victims," ​​describing the silence as a "stain on the human face." [Source: Al-Hal]

4. Official news agency SANA quoted an official source saying that the army's alleged use of chemical weapons in the city of Douma is fabricated. The source added: “The army, which is making a swift and determined advance, does not need to use any chemical materials as claimed by terrorists’ media affiliates. The chemical fabrications, which did not serve the terrorists and their sponsors in Aleppo and the Eastern Ghouta, will not serve them today either, as the Syrian state is determined to end terrorism in every square inch of Syrian territory." [Source: SANA]

5. French Foreign Minister Jean-Yves Laudrian on Sunday called for an emergency session of the United Nations Security Council to discuss the chemical attack by the Syrian regime on the city of Douma near the Syrian capital of Damascus. [Source: SMART]