Damascus' representative at the U.N. rails against the effects of the U.S. and its allies' battle against ISIS 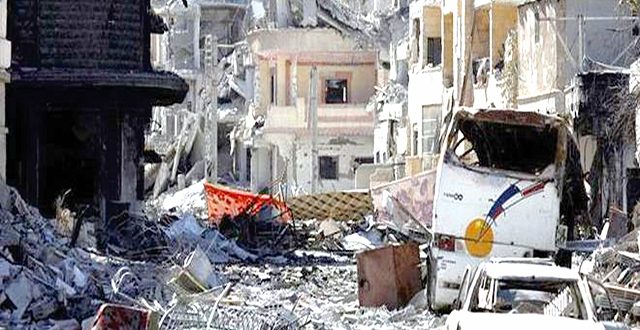 During a U.N. Security Council session held on Tuesday for discussing humanitarian situation in the city of Raqqa and Al-Rukban refugee camp on the border with Jordan, upon the request of Russia, Jaafari thanked Russia for requesting to hold this session on the situation in Raqqa, noting that “Raqqa is a martyred city that has been destroyed fully by the forces of the U.S. and its alleged coalition under the pretext of fighting terrorism.”

Jaafari said that what happened in Raqqa is a one example of the crimes perpetrated by the U.S.-led coalition under the pretext of combating terrorism, while the goal of this coalition has never been fighting terrorism; instead its goal has been undermining the sovereignty, unity and territorial integrity of Syria and weakening power of the Syrian Arab Army and its allies.

He stressed that the true “achievements” of the so-called international coalition were killing thousands of innocent civilians using the dirtiest kinds of weapons and destroying the Syrian infrastructure, including dams, bridges, hospitals, schools and developmental facilities and economic resources, citing as examples the massacres committed by the coalition in Al-Mayadeen and Al-Bukaman in May 2017, in Al-Soura, Al-Dablan, Al-Mayadeen, Dhiban and Tal al-Shayer in June 2017, in Al-Zayanat and Kashkash in July 2017, and in the southern countryside of Hassakeh, Al-Shafa, Dhahret Alouni and Al-Bahra in February 2018.

He noted that this session coincides with Syria’s Independence Day, marking the expulsion of French colonialism on April 17, 1946. He expressed regret that some countries, including France, the U.S., and Britain, which launched cowardly aggression on Syria on April 14, have yet to understand that the will of the peoples for liberation and independence has become a firm truth.