Bilateral and trilateral talk have taken place in the Kazakh capital between Syria, Iran and Russia SANA reports 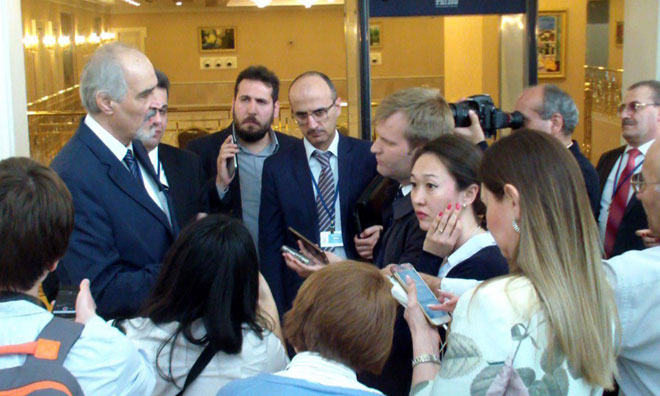 The Syrian Arab Republic delegation headed by Dr. Bashar al-Jaafari held a meeting on Monday with the Iranian delegation headed by the Senior Assistant to Iran’s Foreign Minister for Special Political Affairs Hossein Jaberi Ansari, as part of the framework for the 9th Astana meetings on Syria.

The two sides discussed the topics on the agenda for Astana 9, including the continued consultation and coordination between Syria and Iran, as well as the Turkish regime’s violations of international laws, covenants and some items of the Astana agreements and its continued support for terrorism.

Speaking to Syrian media outlets in Astana, Dr. Bashar al-Jaafari said: “We discussed during the two meetings the continuation of the fight against terrorism in accordance with the Astana agreements and the common will of the three parties (Syria, Iran, and Russia).”

He pointed out that bilateral talks with Russia and Iran will continue on Tuesday, as consultations with the other parties (Turkish participants) will be completed to finalize the concluding statement to be issued at the end of this round of Astana meetings.

The Russian delegation also met with delegation from the Turkish regime.

Sputnik Agency quoted the Press Service at the Kazakh Foreign Ministry as saying that “bilateral and trilateral talks started today in Astana, remaining in the framework of the Astana process on Syria with the participation of delegations from the guarantor states.”

Head of the Press Service of Kazakhstan’s Foreign Ministry Anuar Zhaynakov indicated that the US abstained from sending a delegation as an observer to the talks, adding that the reason behind it is unknown.

The Kazakh capital of Astana has previously hosted eight meetings on Syria, the last of which was on Dec. 21-22.

All the meetings emphasized a commitment to Syria’s territorial integrity and finding a political solution to the crisis in Syria.

A need to adopt urgent and active international steps to help the Syrians achieve a political solution was also emphasized during the meetings.