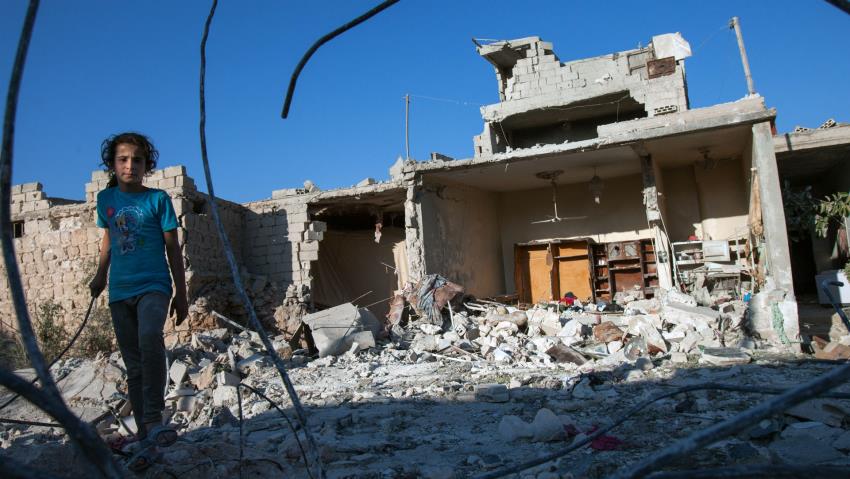 The UN special envoy to Syria warned on Wednesday that a Syrian regime assault on the northern rebel-held area of Idleb would be "six times" more destructive than the battle to recapture Ghouta, which fell last month after years of being under siege.

"If we see a Ghouta scenario in Idleb, this could be six times worse, affecting 2.3 million people," Staffan de Mistura told the UN Security Council's monthly meeting on the Syria conflict.

De Mistura described what he called the classic Syrian regime tactic of heavy bombardment of a rebel territory followed by negotiations and then mass evacuations from the defeated area.

But the special envoy noted that half of the people in the northern rebel province of Idleb had already fled from other parts of Syria, "and will have nowhere else to go because there is no other place to go."

Regime forces recaptured Ghouta from rebels last month after a ferocious offensive that displaced tens of thousands of people, both to regime-controlled zones around Damascus and to opposition-held parts of northern Syria.

More than 1,700 civilians were killed in the deadly Russian-backed offensive.

Nevertheless de Mistura said he was "encouraged" by talks earlier this week in the Kazakh capital Astana on "how to avoid a worst-case scenario in Idleb."

The latest round of peace talks, which wrapped up on Tuesday, did not however make any concrete progress towards ending the seven-year conflict that has cost 350,000 lives.

The high-level talks ended merely with a declaration by the three main guarantor nations of Russia and Iran – both of which are allies of the Damascus regime – and Turkey, which backs rebel groups, that negotiations would resume in July in the Russian city of Sochi, but rebel groups said they would not attend.

Since the Astana negotiations opened at the beginning of last year, they have mostly focused on attempts to keep Syrian regime forces and their rebel opponents at arm's length.

Russia's deputy ambassador to the United Nations, Dmitry Polyanski, said that the solution to the Syria conflict was "simple: restore the sovereignty of Damascus over its territories."

"If you cannot or will not help solve the problem, at least do not stand in our way,” he said in a statement directed at the United States, which did not send a delegation to the latest Astana talks.

Shortly before the UN meeting, the Dutch ambassador Karel Van Oosterom told reporters that the main obstacle to resolving the conflict was that "the Syrian government is not engaging."

He said that was the message that De Mistura himself had made during a recent meeting of the council.

To that end, Karen Pierce, the British ambassador to the UN, called on Moscow and Tehran to use their sway to push Syrian President Bashar al-Assad for a political rather than military solution to the conflict.

"We really need all those with influence on Syria, and that includes Russia and Iran, to encourage them to set aside a military strategy to resolve this conflict and to engage with the United Nations across the board so that we can get back to Geneva and we can get back to a political settlement," she said.

"I would urge those Astana progenitors to do what they can to ensure that on the ground the people in Idleb are safe and that we avert a humanitarian catastrophe there," she said.