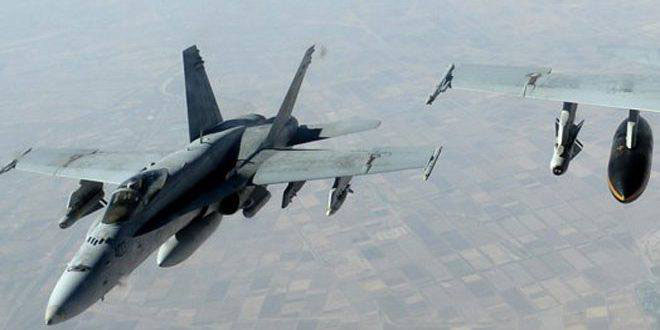 The US-led “international coalition” carried out airstrikes on Syrian Arab Army positions in the south-eastern countryside of Deir-ez-Zor at dawn on Thursday.

A military source said that “some of our military positions between al-Bukamal and Hmeimea were hit this morning in an aggressive move by “American coalition” warplanes,” SANA reported.

The source added that only material damage was caused.

The new attack comes in the framework of the coalition’s explicit support for terrorist organizations and lays bare its fake claims about fighting against terrorism.

The aggression came less than 24 hours after the Syrian army and allied forces thwarted a terrorist attack by Daesh on a number of military points in al-Mayadeen Badiya in the countryside of Deir-ez-Zor. The army killed over 10 of the attacking terrorists, among them terrorists of foreign nationalities, injured scores of others and destroyed a vehicle mounted with a heavy cannon.