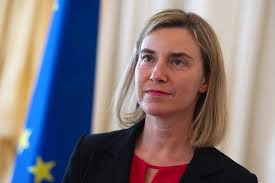 High Representative of the European Union Federica Mogherini met today in Brussels with Nasr Hariri, President of the Syrian Negotiation Commission (SNC) and head of the negotiating team, as well as his delegation.

According to a press release published by Mogherini‘s office, Mogherini discussed with the SNC delegation the outcome of the second Brussels Conference on Supporting the Future of Syria and the Region, which reaffirmed the international community's support for the UN-led peace process and further mobilized humanitarian and financial aid to Syrians inside the country and in the neighboring countries.

Mogherini reiterated the EU's commitment to the UN-led Geneva political process and continued support to the Syrian Negotiation Commission as the opposition representatives in the intra-Syrian talks.

The European Union continues to support the work of UN Special Envoy Staffan de Mistura, including towards an urgent resumption of the negotiations and the creation of a constitutional committee to start its work in Geneva. It is key that the Syrian opposition remains united and engaged in seeking a political solution leading to a comprehensive and inclusive transition in Syria, the statement continued to say.