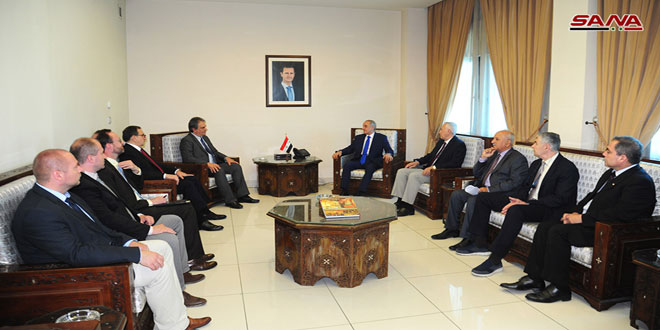 Assistant Foreign and Expatriates Minister Ayman Sosan said on Tuesday that sovereignty, independence and the territorial integrity of Syria are red lines.

Meeting a delegation from the European Parliament, that is currently visiting Syria, Sosana added that any foreign presence without the consent of the Syrian state is illegal and everything that results from it is void because it is an occupation and constitutes a flagrant violation of international law and the UN Charter.

He said that the achievements of the Syrian Arab Army in combating Takfiri terrorism are a victory for humanity.

In turn, members of the delegation expressed their support for Syria in the confronting of terrorism.

They slammed the EU polices towards Syria and affirmed that they will convey the true image of what is happening in Syria for the western public opinion.

The development of the situation in Syria was also discussed during the meeting.

The delegation was headed by President of the Alliance for Peace and Freedom (APF) Roberto Fiore and included a number of European parliamentarians and politicians from Belgium, Croatia and Slovakia.