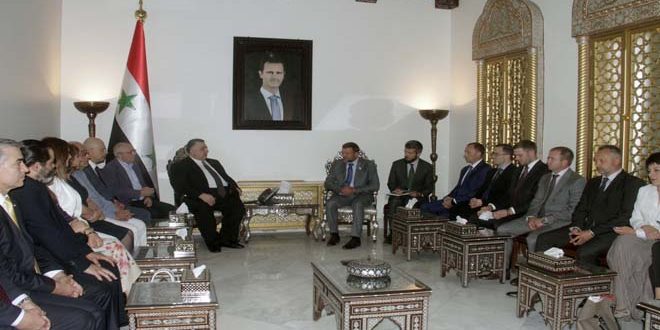 Speaker of the People’s Assembly Hammoudeh Sabbagh stressed the deep-rooted relationship that binds Syrian and Russian people together.

Sabbagh remarks came during his meeting on Saturday with a Russian delegation headed by Dmitry Sablin who is head of the working group for the implementation of the agreement between the al-Baath Arab Socialist Party and the United Russia party and the coordinator of the State Duma’s group for relations with the Syrian Parliament.

Sabbagh said that Syria is continuing to eliminate terrorism, enhance local reconciliations, ensuring the return of displaced people and the reconstruction of the country.

He added that Syria and Russia are partners in achieving victories and that they will rebuild what has been destroyed by terrorism.

For his part, Sablin said that the delegation seeks to sign cooperation agreements to set up more than 22 joint projects in economic, social and industrial fields, underlining the need to pay close attention to the situation of the youth and children and to promote bilateral relations in this field.

The delegation members congratulated the Syrian people for the victories achieved by the Syrian Arab Army in their war against terrorism, pointing out the importance of enhancing the political process and the local reconciliations in parallel with the army’s victories.

This article was edited by The Syrian Observer. Responsibility for the information and views set out in this article lies entirely with the author