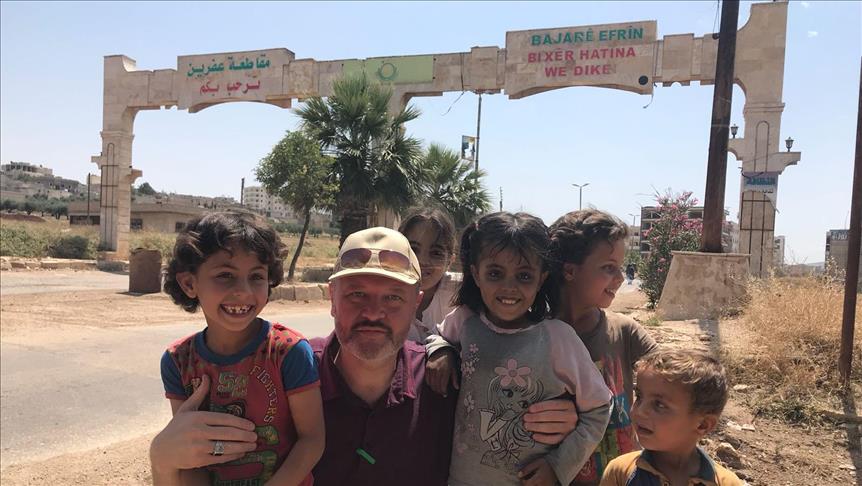 An inventive father in Syria’s southern province of Daraa has discovered and repaired an amusement park ride, destroyed by regime shelling, so that his children might enjoy the Eid al-Fitr holiday.

After finding the damaged ride in an abandoned, burnt-out amusement park near Daraa city, Abou Qusai al-Qutayfan repaired it by hand, replacing several damaged parts that he made himself.

Speaking to Anadolu Agency, al-Qutayfan, 40, explained how he and his family had fled to Daraa’s rural outskirts two years ago due to the precarious security situation.

He and his family of six now live in a makeshift tent they set up in a small refugee camp.

Al-Qutayfan laments that his children, who range in age from two to 12 years old, have only known war and displacement.

“My children were elated after I fixed the ride and they tried it for the very first time,” he said.

“Their happiness is the most important thing for me,” he added. “I want to compensate them for the many joys they have been deprived of.”

Al-Qutayfan’s 10-year-old daughter, Shahd, for her part, was ecstatic about the new ride.

“This is the first Eid we have spent playing and laughing thanks to the ride my father rebuilt,” she told Anadolu Agency.

Syria has only just begun to emerge from a devastating conflict that began in 2011 when the Assad regime cracked down on protesters with unexpected ferocity.