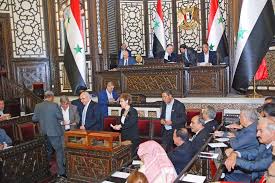 For more than two weeks, the Syrian government, the People's Assembly (PA) and the media have been discussing a bill concerning anonymous descent (children of unknown parentage) in the opposition-controlled areas in terms of how to deal with them in official records and whether they can be considered Syrians or not.

By discussing such a law, the regime seeks to say that most of the residents of the opposition areas have become "bastards" or non-Syrian, and that they are a big problem that must be resolved.

In a farce, regime media published what it called a division among the PA members regarding this issue. The Baath members supported granting these children Syrian citizenship, while non-Baathists and independents opposed this solution, in a cheap attempt to show the Baath as more merciful than the rest of the Syrian parties.

The regime’s media was keen to convey the speeches of members of the People's Assembly, whether those who support the granting of citizenship to anonymous descendants or those who oppose. These remarks suggested that the opposition areas were places of prostitution, and that this is the content of its revolution against regime.

The regime did not provide any figures on the number of those of anonymous descent or the number of cases before Syrian courts that require the registration of births of unknown fathers, which indicates that the regime intended to further abuse the revolution and the opposition.

On the other hand, observers believe that the matter is related to regime controlled areas and terrorist militias that the regime has brought into the country. Many of them were involved in sexual relations that resulted in a number of anonymous descendants, and the regime is looking to justify granting them Syrian citizenship, but wants to place the blame on the opposition area.