It is hoped that both countries will benefit from joint projects, bolstering their economies writes SANA 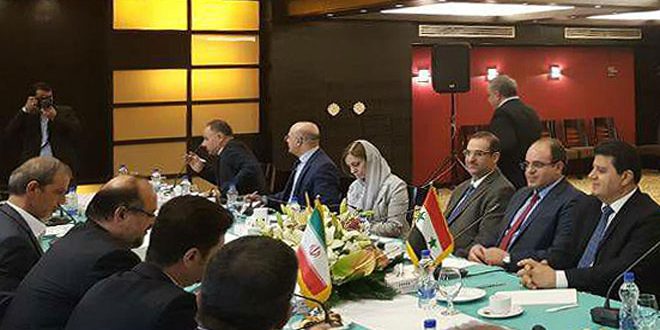 Al-Khalil heads the Syrian side of the Syrian-Iranian Joint Ministerial Economic Committee.

During their meeting in Tehran on Tuesday in the presence of Syria’s Ambassador to Iran, Dr. Adnan Mahmoud, the two Ministers expressed their desire to benefit from potential public and private sector opportunities in both countries and to enhance cooperation in different economic, commercial and investment domains.

Both sides discussed means of developing and activating the Free Trade Agreement in the interest of the two countries, reviving the joint investment of some free zones, setting up joint banks and exchanging the opening of accounts and dealing in local currencies.

Al-Khalil thanked the Iranian leadership, government and people for supporting Syria in its war against terrorism.

“Iran will be a main partner in the reconstruction process,” he said.

For his part, Shariatmadari described the Syrian-Iranian relations as “strategic and deep-rooted.”

The Iranian Minister hoped that all Syrian lands would be free from terrorism.

“After achieving victory over terrorism, Syria’s reconstruction phase will start,” Shariatmadari said, expressing Iran’s full readiness for active participation in this phase and for cooperation in all domains.