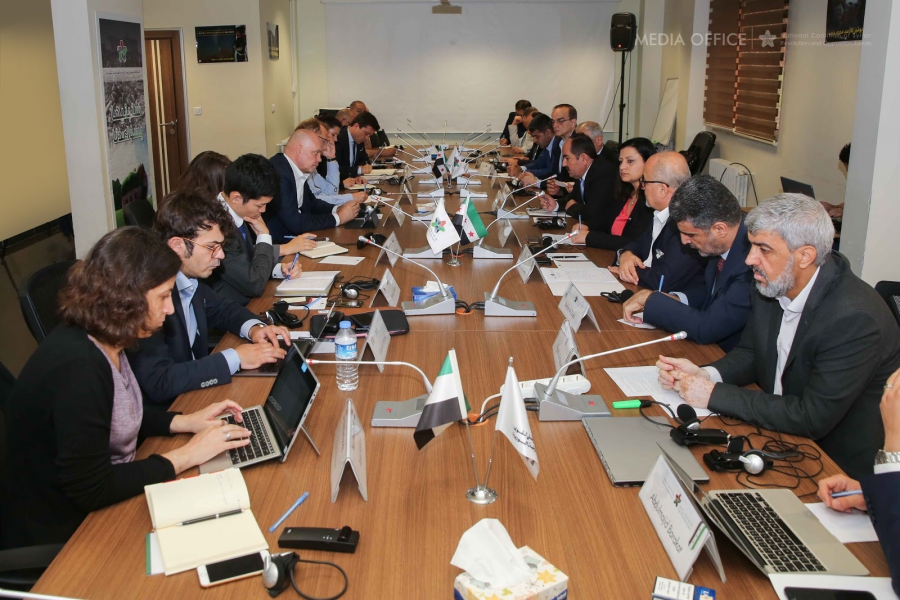 President of the Syrian Coalition Abdurrahman Mustafa and Head of the Syrian Interim Government (SIG) Jawad Abou Hatab met with representatives from countries that are friendly to the Syrian people. Both sides discussed the latest developments on the ground in Syria and the fresh military attacks being launched by the Assad regime and Iranian terrorist militias against civilians in southern Syria.

President Mustafa said that the regime’s escalating attacks have caused the mass displacement of civilians in southern Syria, stressing that attacks against civilians constituted war crimes requiring urgent international action to stop them.

President Mustafa pointed out that the Coalition utterly rejects the implementation of Law No. 10 as it is aimed at the consolidation of mass forced displacement and demographic change.

Bashar al-Zoabi, a representative of the Southern Front in the Syrian Coalition, stressed that the Assad regime and Russia are committing widespread war crimes in the province of Daraa. "The situation in Daraa province is dangerous. We contacted most of the friendly countries and sent them letters via the Coalition and the Syrian Negotiations Commission, but unfortunately the regime continues with its military campaign against civilians in the region. There is a large wave of displaced civilians, with numbers that may reach unprecedented levels in the coming few days should violations of the regime continue.”

For her part, Vice-President of the Syrian Coalition, Dima Moussa, warned that the forced displacement and demographic change operations as well as the regime’s issuance of Law No. 10 will have a direct impact on the political process and political transition, especially with the regime’s confiscation of civilian property. She underscored that Law No. 10 risks discouraging the return of displaced persons and refugees to their homes, adding that the issuance of the law “proved that the Assad regime is not serious about engaging in the political process.”

Hadi al-Bahra, member of the political committee, said: "We are focusing not only on forming the Constitutional Committee, but also on its work. This Committee should be part of the Geneva process and under the auspices of the United Nations."