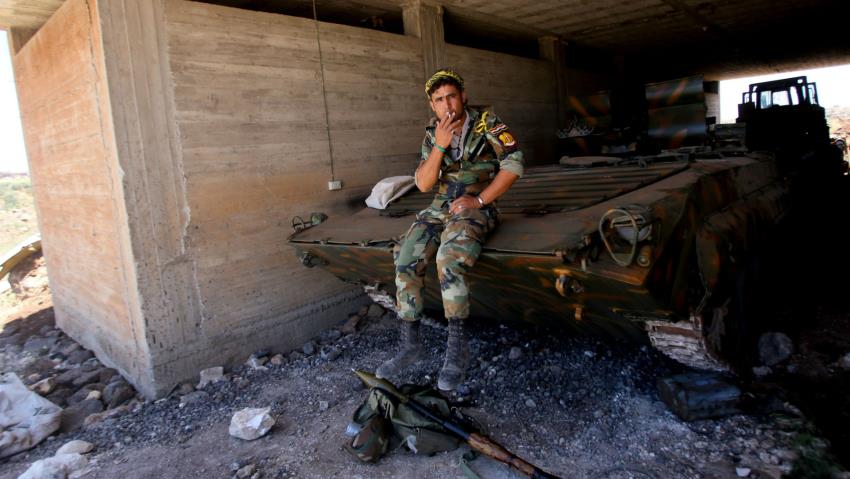 The coordinator of the Crisis Team in Horan Adnan al-Massalmeh has announced that the negotiations with the Russians reached a dead end, calling for the launch of a "popular resistance" against the regime and the Iranian-backed attack on Daraa.

"The civil crisis management team agreed on the principles of the negotiations and we met with the Russian occupier on Jul. 29, 2018,” Massalmeh said in a statement.

"We saw the conditions they wanted to impose and their lies. The Russians wanted to buy more time to avenge and humiliate Daraa, the cradle of the revolution,” the statement continued.

He added, “We consulted with the women and men of Horan, who refused a humiliating surrender and therefore we declare our categorical rejection of these negotiations and withdraw immediately from them."

Massalmeh said that the Russian airforce tried to target the negotiating delegation as they travelled to Busra Al-Sham, thus violating all the covenants and customs of honor. The Russians postponed the meeting more than once in Busra al-Sham in an attempt to create enough time for the siege to be imposed.

He added, "The conditions offered by the Russian are humiliating and cannot be accepted. The Russians insist that the commanders provide full lists of fighters in the Free Army under the pretext of resettlement. They also insist that regime forces be present in all cities and villages, including the Crossing of Nasib, the city of Daraa, and Busra al-Sham – without exception."

Opposition and pro-regime media in Daraa have announced that the Syrian regime had been able to get the approval for "reconciliation" agreements from eight towns in the eastern and northern province of Daraa, after Russian-led negotiations which happened during air raids and artillery shelling on opposition controlled areas.

"The regime wants us to hand over everything, the city of Daraa, the Nasib Crossing, ourselves and the heavy weapons, and this is unacceptable," a member of the reconciliation committee in Daraa was quoted as saying by AFP.