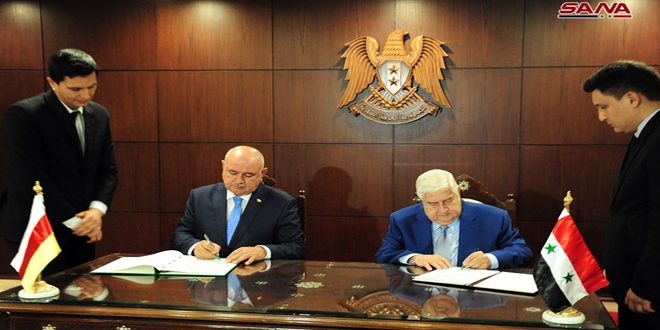 On Sunday, Deputy Prime Minister and Foreign and Expatriates Minister Walid al-Muallem met with the Foreign Minister of the Republic of South Ossetia Dmitry Nikolayevich Medoyev, and the accompanying delegation.

Talks during the meeting dealt with the importance of developing bilateral relations between the Syrian Arab Republic and South Ossetia in various fields.

Muallem said that this visit shows the interest of the two countries to strengthen bilateral relations, which will be crowned by the signature of a number of bilateral agreements, which constitute an important framework for their relations and serve the interests of both friendly countries and their people.

He talked about developments in Syria and the region, in light of the victories achieved by the Syrian Arab Army and its allies against terrorism and its backers.

For his part, Medoyev expressed the appreciation of the Ossetian leadership for Syria’s stance regarding the issue of the recognition of the Republic of South Ossetia.

He stressed the Ossetian’s desire to upgrade relations with Syria at all political, economic and cultural levels.

Following the meeting, the two ministers inked an agreement on setting up diplomatic relations between the Syrian Arab Republic and South Ossetia.