The Republic of South Ossetia is a breakaway region of Georgia, which is loyal to Russia writes The Syria Times 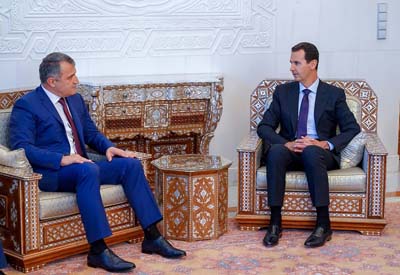 The talks focused on the importance of the establishment of bilateral relations in all fields in the interest of both republics and both friendly people.

Several agreements and a treaty of friendship and cooperation are to be signed during President Bibilov's three day visit to the Syrian Arab Republic.

President Bibilov appreciated the Syrian support for the independence of the Republic of South Ossetia and reiterated his country's solidarity with Syria, which has been battling terrorists, in the interests of world peace.

President Assad thanked President Bibilov and his country for standing by the Syrian People in their self-defence and their defence of Syria against terrorism and the countries supporting terrorism.

President Assad reiterated the correctness of the Syrian interest towards the East where countries respect the bases and principles of international law; contrary to those countries in the West that know nothing but the policy of dictating.

At the end of their expanded talks and in presence of the concerned officials from both countries, Presidents Assad and Bibilov signed a treaty of cooperation and friendship.