According to the report, 219 people were killed in these massacres, with 31 percent being women and children writes the Syrian Network for Human Rights 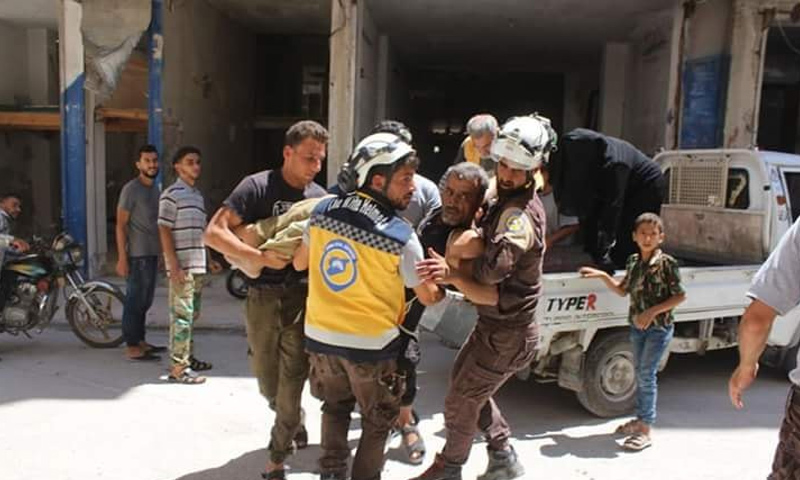 On Thursday, the Syrian Network for Human Rights said that at least 15 massacres had been committed in Syria by the main actors in the conflict during the month of July.

The report said that the forces of the Syrian-Russia alliance on Jun. 15, 2018, began a heavy military campaign in Daraa province which lasted throughout July and went on to include all parts of southern Syria that were outside the control of Syrian regime forces. During this campaign, they used all types of weapons until they had regained control and forcibly displaced residents — the forcible displacement began on Jul. 15, 2018. According to the report, Syrian-Russian alliance forces carried out seven massacres in July, all of them in southern Syria.

On Jul. 25, 2018, there was an operation by the Islamic State (ISIS) to slip into Suweida and a number of villages in its eastern countryside to carry out at least five massacres according to the report before withdrawing again.

According to the report these massacres resulted in the deaths of 219 people, including 38 children and 30 women — that is, 31 percent of the victims were women and children. This is a very high rate, and an indication that most of these massacres were targeted against civilian residents.

The report said that the attacks that were carried out by coalition forces (the International Coalition and the Syrian Democratic Forces) caused incidental lose of civilian life or injury or major damage to civilian property. There were very strong indications that lead to the belief that the damage was very excessive compared to the desired military benefit.

The report said that the attacks carried out by other parties caused loss of civilian life, adding that these violations could amount to war crimes, but did not reach the level of crimes against humanity, as did those of the regime and its allied militias.

The report called for the implementation of the Responsibility to Protect (R2P) doctrine, especially after political measures through all the agreements and statements of cessation of hostile activities and the Astana deals were exhausted. It stressed the need to resort to Chapter Seven and implement the R2P principle approved by the United Nations General Assembly.

The report recommended that both the international Commission of Inquiry (COI) and the International Impartial and Independent Mechanism (IIIM) open investigations into the incidents put forward in the report, and stressed the readiness of the Syrian Network for Human Rights to cooperate and provide more evidence and details.

The report called for armed opposition groups to guarantee the protection of civilians in all areas and to open an investigation into the attacks which had caused civilian deaths as well as the need to distinguish between military and civilian targets and refrain from indiscriminate attacks.