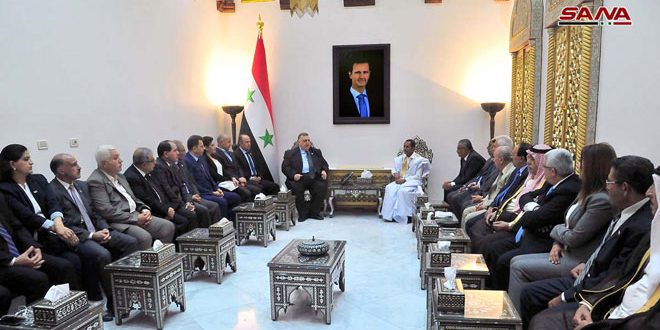 Speaker of People’s Assembly Hammoudeh Sabbagh affirmed the depth of the historical relations between the people of Syria and Mauritania, despite the geographical distance between them.

Sabbagh’s remarks came during a meeting with a delegation from the Mauritanian Socialist Democratic Unionist Party, headed by its Secretary General Mahfouz Weld Abdul al-Aziz.

The Speaker said that Syria will continue eliminating terrorists’ remnants in parallel with continuing to achieve local reconciliations and launching the reconstruction phase.

In turn, the head of the delegation expressed the Mauritanian people’s solidarity with the Syria, which it has held since the beginning of the crisis.

He asserted that Palestine will remain the central cause until the liberation of the entire Palestinian territory and the elimination of the Zionist-imperialist plan in the region.